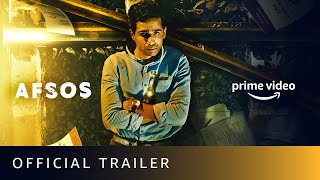 Nakul's only goal in life is to finish it. After several failed suicide attempts, he pays for his own death. Upadhyay, a deadly assassin is assigned to get the job done. But Nakul has a change of heart. He chooses to live, however Upadhyay never leaves a job undone. An riveting cat and mouse chase ensues while a divine intervention flips everything upside down in this black comedy thriller.
Afsos is Hindi Drama web series with Aakash Dahiya and Gulshan Devaiah in the lead role. It is currently streaming at Prime Video.

Where to watch season 1 of Afsos online?

The full cast of Afsos includes Aakash Dahiya, Gulshan Devaiah and Anjali Patil. Aakash Dahiya has also worked in shows Raat Baaki Hai and movies like Mastram and Meeruthiya Gangsters. Gulshan Devaiah has also worked in shows SMOKE and movies like Goliyon Ki Raasleela Ram-Leela, Hate Story and Shaitan. The creator of the show is not known at this time.

S1 E1 . The Solution
After repeated suicide attempts, Nakul gives his own contract to a hitman agency. 12 sadhus are mysteriously murdered in the Himalayas which may or may not be connected to Nakul.
07 Feb '20
S1 E2 . The Calm
Shloka expresses her feelings for Nakul, giving him new hope as Upadhyay is on her way. And so is a divine intervention.
07 Feb '20
S1 E3 . The Afterlife
Fokatiya seems to have finally tracked down the immortal man while journalist Ayesha Mirani probes into Maria’s business. Nakul is obviously not dead. Zero points for guessing that.
07 Feb '20
S1 E4 . The Stranger
Fokatiya declares Nakul to be immortal as the origin story of the potion unfolds. The ashram murderer is revealed.
07 Feb '20
S1 E5 . The Immortal
Upadhyay has Shloka captive while Jim has Nakul. The immortality potion is lost and the sniper is out.
07 Feb '20
S1 E6 . The Crow Must Die
Nakul cracks an outrageous plan to rescue Shloka. A new candidate emerges in Fokatiya’s search for the immortal. Goldfish stirs shit up.
07 Feb '20
S1 E7 . The Shootouts
Nakul and Upadhyay face off and someone dies in the exchange. Bir Singh and Fokatiya are at Goldfish’s mercy, and Vitthal is their only hope.
07 Feb '20
S1 E8 . The Problem
Shloka dismantles Upadhyay mentally in an attempt to escape. Fokatiya breaks a limb but finds his man. Nakul is back at the railway tracks.
07 Feb '20