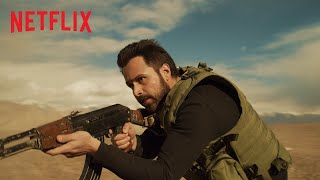 An excommunicated RAW agent, Kabir Anand, a courageous analyst, Isha Khanna, and a sleeper agent, Veer Singh, take on a covert mission in Balochistan when four Indian spies are captured. The mission soon turns south and Kabir Anand, played by Emraan Hashmi, must face his demons from the past to end a war before it begins.
Bard of Blood is Hindi Drama-Mystery web series with Emraan Hashmi and Amit Bimrot in the lead role. It is currently streaming at Netflix.

Where to watch season 1 of Bard of Blood online?

You can watch season 1 online here at Netflix .

S1 E1 . What's Past is Prologue
When four Indian operatives are taken hostage by the Taliban, a secret service director asks former agent Kabir Anand to take on the rescue mission.
27 Sep '19
S1 E2 . When Sorrows Come, They Come Not Single Spies, but in Battalions
Secret codes left at a murder scene prompt Kabir to reconsider Sadiq’s proposed mission in Balochistan and bring on board two unlikely agents.
27 Sep '19
S1 E3 . So Quick Bright Things Come to Confusion
A key detail emerges about Khalid's location. Kabir taps into a personal link to the Balochi resistance. Joshi learns of the unsanctioned mission.
27 Sep '19
S1 E4 . Love All, Trust a Few, Do Wrong to None
A mystery woman from Kabir’s past returns. As the agents devise a risky new plan, Kabir recounts the truth about his last mission in Balochistan.
27 Sep '19
S1 E5 . Fight Fire With Fire
Despite hitting a snag, the agents’ oil pipeline job galvanizes the BAF. Khalid begins to doubt Shehzad, who has suspicions of his own.
27 Sep '19
S1 E6 . Heat Not a Furnace for Your Foe So Hot That It Do Singe Yourself
Kabir strikes a deal in exchange for an escape route. Veer is met with a surprise at Shehzad’s hideout, while the pursuit of Khalid goes awry.
27 Sep '19
S1 E7 . My Stronger Guilt Defeats My Strong Intent
With the clock ticking, a showdown occurs at the Taliban stronghold and Kabir races to catch up to Shehzad -- but a curveball is yet to come.
27 Sep '19