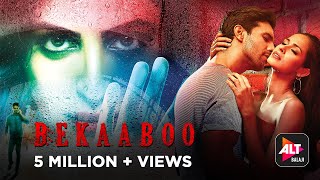 Kiyaan Roy's bestselling erotica novel gifts him a life that appears as perfect as a dream. However, the deepest corners of his heart desire for a different kind of pleasure; a wild pleasure that comes with pain. One day he realizes that someone has been watching him and knows his secret. Someone, who is equally obsessed with the pleasure in pain. Surprised at his luck and tempted by the opportunity, he sets out to explore his dark fantasies with her. But things turn out to be wilder than his imagination and he ends up at the verge of losing everything he ever had-right from his reputation and career, to his family and fiancée.
Bekaaboo is Hindi Adult-Drama web series with Priya Banerjee and Rajeev Siddhartha in the lead role. It is currently streaming at ALTBalaji.

Where to watch season 1 of Bekaaboo online?

You can watch season 1 online here at ALTBalaji .

S1 E1 . Aur Phir Aayi Ek B***h
Famous erotica writer Kiyan Roy’s life tumbles into chaos when a dangerous fan begins to stalk him.
15 May '19
S1 E2 . Wo Kaun Thi?
Kashti is dangerous, and Kiyan doesn’t want her around Anaysha. What will Kiyan do to keep Kashti away from Anaysha?
15 May '19
S1 E3 . Pain Aur Pleasure
Kiyan thinks if he gives his crazy stalker what she wants, she might leave him alone for good. But he is wrong.
15 May '19
S1 E4 . H***y Ko Kaun Taal Sakta Hai?
Kiyan and Kashti move in together. She promises to fulfill all his desires.
15 May '19
S1 E5 . Charam Sukh Ya Forever Dukh
Desperate to get away from Kashti, Kiyan is glad to catch her in a vulnerable moment.
15 May '19
S1 E6 . The Twist and The Twisted
Kiyan visits Tina’s apartment and witnesses something strange.
15 May '19
S1 E7 . Bhootiya Ya Ch***ya
Kiyan searches for clues in Tina’s empty flat. He is confident that someone is surveilling him closely.
15 May '19
S1 E8 . Indecent Proposal
Kiyan proposes Kashti in a restaurant. Later, he follows Tina to her apartment.
15 May '19
S1 E9 . Mission Gulshan
Anaysha agrees to help Kiyan but on a condition that he tells her the truth.
15 May '19
S1 E10 . Season Finale : The Climax
The media is in for a rude shock as the truth is exposed when Kashti and Kiyan come face to face.
15 May '19