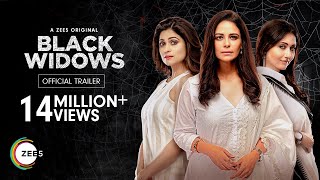 Black Widows is officially a Finnish drama. Since it's successful launch in 2014, the Finnish drama has been licensed across 7 regions. Veera, Jayati and Kavita, tired of abusive and unloving husbands, plan and execute the murder of their husbands in what they make look like a boat accident. It was an almost perfect plan, as the boat blew up mid sea, when the three couples had gone for a quick vacation, in what looked like a simple boating accident. It's a secret the three women share, a secret that will help them move on from the drudgery of their unhappy lives. The police investigation led by Inspector Pankaj Misra and Inspector Rinku Sharma do not suspect the 'grieving widows'. The story of the accident begins to unravel when the innocent boat blast is confirmed by forensics to be a bomb blast. To add to the women's problems - Rameez, Veera's husband Jatin's business partner - believes that Jatin has hidden some money that belongs to him.
Black Widows is Hindi Drama web series with Aamir Ali and Sabyasachi Chakrabarty in the lead role. It is currently streaming at ZEE5.

Where to watch season 1 of Black Widows online?

S1 E1 . Boom
Trapped in horrible marriages, Veera, Jayati and Kavita, decide to get rid of their abusive husbands during a weekend getaway. While they manage to execute their seemingly perfect plan, things start getting worrisome when the police begin investigating the case and get their hands on some clues that could put the women in a spot. Also, Veera realise she and her daughter may be in grave danger.
18 Dec '20
S1 E2 . Freedom, Life, and Choices
The three widows try to get their lives back on track but face various unexpected situations that keep them on their toes. Unbeknownst to them, a different, sinister plot is unfolding at the lakehouse, and Rameez seems to be aware of it.
18 Dec '20
S1 E3 . Teddy Bear
Inspector Pankaj is certain he is on to something when he tries to trace the explosives used in the blast. Jatin tries to make sense of the attempt on his life, connecting it to his closely guarded secrets. The mysterious plot around MediPharma thickens even as the women, completely unaware of it, try to make sense of the turns their lives are taking.
18 Dec '20
S1 E4 . The Killer
Veera has a new problem at hand which Jayati and Kavita must aid her with but, Kavita may be more of a hindrance than a help. Pankaj and Rinku's suspicion on the three women grows, and an unlikely witness may have given them an important clue. Inaaya Thakur, the boss of MediPharma, now begins to get involved as Rameez’s death may complicate matters for her and finds an unexpected ally. Barry, Pankaj's boss, asks him to stop working on the case.
18 Dec '20
S1 E5 . Finding love
Kavita’s desire to find a connection with someone will take her down a strange path. Jatin needs to get his hands on a key piece of evidence before it is too late. Convinced that there is more to the cases, Pankaj and Rinku continue with their investigation, making Inaaya and Barry uncomfortable. Jayati and Veera try to crack a business deal with Inaaya Thakur but are unaware of her dangerous intentions.
18 Dec '20
S1 E6 . No More A Victim
While Kavita is obsessed with her ‘true love’ and her blog, both Jayati and Veera realise just how precarious their future could be. Jayati forms a bond with Jahaan while Veera is rescued from her misery by a friend. Meanwhile, Jatin struggles to find a solution to his problem, and Pankaj and Rinku inch closer to discovering the complete truth. Where will it lead them?
18 Dec '20
S1 E7 . The Deal
Veera faces a harsh reality that splits her path from that of her friends. Meanwhile, Jayati's determination to break Inaaya meets with an unexpected obstacle. Kavita's involvement with Jahaan leads to dire consequences. Pankaj and Rinku continue to dig further as new layers to the case are exposed. Inaaya comes up with a plan to cover her tracks but, a long shot by Jatin could ruin it all.
18 Dec '20
S1 E8 . Purple Moments
Jatin tries to expose Inaaya, but his attempt hits a roadblock. Veera and Jayati must play their cards smartly with Inaaya, or they risk losing more than they are aware of. Veera finds it difficult to hold on to her hatred for Jatin and tries to balance her feelings between him and Eddie. Meanwhile, Rinku feels jealous about Pankaj's diverted attention.
18 Dec '20
S1 E9 . Jatin Must Die
Veera can barely hold on to her secrets from her friends and Eddie when they all fall in grave danger. The friendship between the three women starts falling apart as they disagree on their next move. Kavita closes an old chapter of her life. While Inaaya's two accomplices pose a threat to each other, Pankaj and Rinku must find proof to support their version of the truth.
18 Dec '20
S1 E10 . Crossroads
Kavita is worried about her future and considers taking a drastic step. Veera decides to help Jatin in his quest while Pankaj and Rinku attempt to unravel a possible conspiracy by connecting the dots. Jayati and Inaaya lock horns, but a jealous Kavita might change the game. Will the three women go their separate ways?
18 Dec '20
S1 E11 . Flash Drive
While Pankaj deals with the blurring lines between his personal and professional life, Jatin hatches a grand plan to solve a problem. Veera must make a tough choice while Pankaj confronts Jayati. Unlikely allies come up with a way to end Inaaya's threat. Meanwhile, Kavita finds herself at the losing end yet again. Will she pose a threat?
18 Dec '20
S1 E12 . Love and Death
Kavita's situation threatens to put the entire plot in danger while Rinku's rage pushes her to a point of no return. All lines converge, and every action bears a consequence. What does fate have in store for Kavita, Veera and Jayati?
18 Dec '20