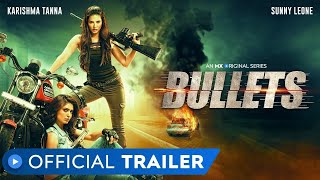 Tina and Lolo are bold, badass and brave girls who find themselves on a mission to thwart an illegal arms/weapons deal between two countries. On the quest to gather evidence, a mishap occurs and the duo is suddenly up against an influential politician. They soon find themselves being chased not only by his goons but also by the police. Whilst on the run to save themselves from the repercussions of an incident, they are faced with multiple hurdles Will they get arrested, will they get killed or will they be able to complete their mission. Shot in the most stylish and beautiful locales in India and Malaysia, this unpredictable and thrilling chase packed with high octane action will definitely keep you on the edge, craving for more.
Bullets is Hindi Drama-Thriller web series with Sunny Leone and Karishma Tanna in the lead role. It is currently streaming at MX Player.

Where to watch season 1 of Bullets online?

The full cast of Bullets includes Sunny Leone, Karishma Tanna, Vivek Vaswani, Amaan Khan, Deepak Tijori and Taha Shah Badussha. The show is stacked with the popular stars. Among the lead cast, Sunny Leone and Karishma Tanna have also worked together in Tina and Lolo in past. Sunny Leone has also worked in shows Karenjit Kaur and MTV Splitsvilla and movies like Mastizaade, Jism 2 and Ragini MMS 2. Karishma Tanna has also worked in shows Naagin and Qayamat Ki Raat and movies like Grand Masti, Lahore Confidential and Rai. The creator of the series is Devang Dholakia, who has also created films like Kuch Kuch Locha Hai and Tina and Lolo.

S1 E1 . Episode 1
On the grand launch of the city’s most popular and niche pub, the owner Sunil Korade gets killed.Till the time police arrive at the crime scene Tina, his girlfriend manages to run away from the crime scene. Tina meets Lolo who is trying to collect some data from Hemant Korade’s office (father of Sunil Karode) and helps her run away from the crime scene. Did Tina murder Sunil?
08 Jan '21
S1 E2 . Episode 2
Sunil Korade is killed, and the police are trying to solve the case by investigating the murder. While checking the CCTV footage police identifies Lolo and Tina running away from the crime scene. Police are searching for the girls day and night as there is a lot of pressure from Hemant Karode who has a political background. Even Hemant has put in all his efforts to locate the girls before the police catch them. Will Tina and Lolo be caught?
08 Jan '21
S1 E3 . Episode 3
While the entire city from the police to the media is chasing the two girls Lolo and Tina, they reach a lodge to hide from the police and Hemant’s loyal - Ketu. Meanwhile, Vidya, a journalist reaches the police station to ask questions about the murder case for her new headlines. Will they be traced by Ketu in the lodge? For how long will they be able to escape?
08 Jan '21
S1 E4 . Episode 4
Unaware of the fact that they have been tracked by Ketu, the girls are relaxing in the pool but they soon realize that the happy moment doesn’t last for long. They have come to know that they have been located and somebody is coming after them. Where would they escape to now? Would they be able to leave the lodge before getting caught or this the end for them?
08 Jan '21
S1 E5 . Episode 5
Life is unpredictable for everyone and it is so for both the girls. Media, being a watchdog, is covering every activity of Tina and Lolo. They both see news flashing on the TV that they were the murderers and now are trying to escape from the police. After watching this news Lolo decides to take the police in confidence by sharing the secret data collected from Korade’s office on the day murder. Will the police believe them?
08 Jan '21
S1 E6 . Episode 6
Lolo’s plan worked tremendously well and with the help of the police, Lolo and Tina now reach Malaysia away from all the trouble. But they were unable to escape Hemant's real loyal Ketu who is frustrated and catches both the girls. Will Ketu kill the girls or is it just the beginning of another adventure for the trio?
08 Jan '21