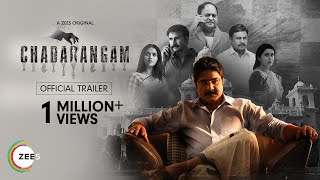 Where to watch season 1 of Chadarangam online?

You can watch season 1 online here at ZEE5 and Disney+ Hotstar .

S1 E1 . Let the Game Begin
The state’s general elections are approaching. While Superstar Ganga is shooting for his film in a remote location, the political current, back in Hyderabad, begins to change in his favour without his knowledge. Media baron Guru Murthy and seasoned politician RK start moving their pawns individually. Will Ganga be part of their game?
20 Feb '20
S1 E2 . Preparations Galore
As the state general elections come closer, Ganga forms a core team with Guru Murthy’s help. He is also introduced to journalist Kranthi. Prime Minister Mrs.Dhar notices Ganga and keeps a keen eye on him, while RK rides on his popularity among the masses.
20 Feb '20
S1 E3 . The Truth Unfolds
As Ganga reminisces his childhood days, Kranthi leaves Ganga’s team and starts her independent endeavour. Ganga calls for a meeting with all the regional leaders. RK finds a shocking truth about Andhra's politics when he goes to Delhi to attend an all-state finance ministers' meet. Simultaneously, Paro, a teenager undergoing terrible withdrawal symptoms from her cocaine addiction, gets 'help' from Suraj, a drug peddler.
20 Feb '20
S1 E4 . The Investigation Begins
While Ganga wants to start a team of contract employees to oversee his welfare schemes' distribution, Kranthi is about to publish an investigative piece on TKS MLA Lova Raju and his sand mining mafia. While Ganga wants Lova Raju to be arrested, Bapineedu is opposed to the same. In the meanwhile, both Paro and Suraj get into deep trouble.
20 Feb '20
S1 E5 . Drugs vs Politics
When Ganga’s son urges him to fight the drug menace in the state, Ganga decides to handle the issue with an iron fist. When he travels to Singapore for his son's treatment, RK gets an anonymous call that can upset Andhra's political state. As RK meets the intelligence chief, ex-CM, and the Home Minister at his place, Bapineedu gets a piece of alarming information that signals a brewing coup.
20 Feb '20
S1 E6 . Boomerang
As the political drama intensifies in the state, agitators set a train on fire to protest against the reservations. RK’s wife counsels her husband towards making a move that can topple the government. RK starts three secret camps with the MLAs. However, Bapineedu manages to infiltrate one of the camps. Just when Ganga decides to go public, the outcome of the coup is threatened by an unexpected development.
20 Feb '20
S1 E7 . When Everything Goes Wrong
Despite Bapineedu's best efforts, RK finds the missing 15 MLAs who were stopping him from convening an assembly session. On Ganga’s orders, Bapineedu tries to keep Kranthi and Sekhar’s affair video from reaching RK’s team. In the meanwhile, INP starts a maligning campaign against Ganga, who tries to gather public support. How will Ganga and Bapineedu deal with the disorderly situation?
20 Feb '20
S1 E8 . Back to square one
The Prime Minister, Mrs.Dhar, directs Patel not to bet on the losing horse anymore. The coup ends, and Ganga resumes his position even though he is upset with the current state of political affairs. He decides to cleanse the system by dissolving the government. It's time for elections.
20 Feb '20
S1 E9 . The rise of a new era
In an unfortunate incident, Mrs. Dhar gets assassinated. Her son, Aravind Dhar, tries to ride on the sympathy wave and actively campaigns in Andhra. Will the PM’s untimely death make people forget about the injustice done to Ganga? Will Ganga’s son or nephew be the new successor? Or, will Kranthi claim the top spot? Can Ganga find solace after all the political injustice?
20 Feb '20