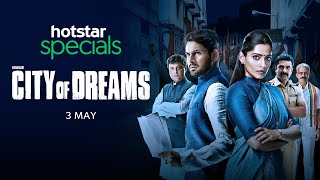 Multiple lives intersect after an assassination attempt on Mumbai's most polarising political figure.A single stone thrown in a seemingly placid lake sets off a series of ripples that affect everyone and hurt many. 'City of Dreams' is the story of the feud within the Gaikwad family, which erupts after an assassination attempt on a polarizing political figure. Blurring the lines between moral and immoral, in a struggle for power forms the core of this transfixing narrative.
City of Dreams is Hindi Mystery-Thriller web series with Priya Bapat and Siddharth Chandekar in the lead role. It is currently streaming at Disney+ Hotstar.

Where to watch season 1 of City of Dreams online?

You can watch season 1 online here at Disney+ Hotstar .

The full cast of City of Dreams includes Priya Bapat, Siddharth Chandekar, Eijaz Khan, Vishwas Kini, Sandeep Kulkarni and Amrita Bagchi. Priya Bapat has also worked in shows Aani Kay Hava and movies like Me Shivajiraje Bhosale Boltoy, Timepass 2 and Happy Journey. Siddharth Chandekar has also worked in shows Adhantari and movies like Gulabjaam, Zenda and Satrangi Re. The creator of the series is Nagesh Kukunoor, who has also created shows The Test Case and films like Iqbal, Rainbow and Dor.

Other Seasons for City of Dreams

S1 E1 . The Shootout
An assassination attempt on Mumbai's political stalwart Ameya Gaikwad stuns the city. As the family deals with the shock, his son Ashish takes centre stage, while Encounter Wasim gets on the case, unofficially.
03 May '19
S1 E2 . The Response
With his personal life in a mess, Wasim gets a lead on one of the shooters. Meanwhile, Ashsh spins out of control and concerned Jiten asks Poornima to take charge
03 May '19
S1 E3 . The Rift
Poornima tries to persuade Ashish to consult her before making any decision, which doesn't go down well with him. Meanwhile, Wasim keeps the hunt on in his own inimitable style.
03 May '19
S1 E4 . The Hunt
When Ashish crosses the line, Poornima confronts him. On the other hand, Wasim tries to change the game with the trump card in his hand
03 May '19
S1 E5 . The Decision
Ashish makes a shocking confession to Shireen. Later, a furious Poornima opens up to Lipakshi.
03 May '19
S1 E6 . The Black Book
Poornima turns the table on Ashish's rally. Elsewhere, Wasim gets closer to the assassin, while Jiten hides the black book
03 May '19
S1 E7 . The Mastermind
Consumed by power and politics, Poornima's relationship with Kaushik begins to crumble. Wasim meets an old informant and finds a crucial lead.
03 May '19
S1 E8 . The awakening
Scrambling for political support, Poornima tries hard to find her normal, while CM jagdish gets into an unexpected alliance.
03 May '19
S1 E9 . The Betrayal
Taking advantage of the situation, Jagdish makes his way to Delhi while Poornima learns the truth about the attack and the perpetrators.
03 May '19
S1 E10 . The Victory
in the lead up to the grand party meeting, matters come to head. Someone will win and someone will lose.
03 May '19