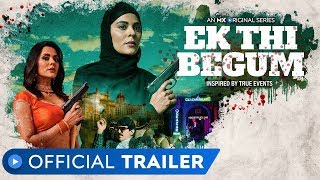 A story of a stunningly beautiful woman; Ashraf aka Sapna, the loving wife of Zaheer – a once confidante of Maqsood, the underworld don, but now an arch rival.
When the rift between the rivals reaches ugly culmination Zaheer gets killed. Ashraf vows to overturn and destroy Masood’s illegal empire using her beauty, sensuality and acute intelligence.
Ek Thi Begum is Hindi Drama-Romance web series with Anuja Sathe and Chinmay Mandlekar in the lead role. It is currently streaming at MX Player and Youtube.

Where to watch season 1 of Ek Thi Begum online?

You can watch season 1 online here at MX Player and Youtube .

Other Seasons for Ek Thi Begum

S1 E1 . Anuja Sathe
Zaheer, a member of the underworld, finds himself in a shootout situation with a few members of the Maqsood gang and the Nana Mhatre gang. Zaheer manages to escape the situation, but in the process, Raghu Mhatre ends up dead. Not only was Raghu a member of the Maqsood gang, but he was also Nana Mhatre’s brother. Raghu’s death puts Zaheer in some real danger as his animosity with the Maqsood gang has now extended to animosity with the Nana Mhatre gang as well. Not only Zaheer, but his wife
06 Aug '21
S1 E2 . The Turning Point
After Zaheer’s altercation with the Maqsood gang and the killing of Raghu Mhatre, member of the gang and brother of Nana Mhatre, leaves Zaheer and Ashraf in terrible danger and looking over their back constantly, a ray of hope enters their lives in the form of the amazing news of Ashraf’s pregnancy.
08 Apr '20
S1 E3 . The Naked Truce
After escaping an attack from the Nana Mhatre gang, Zaheer and Ashraf look to settle peacefully as Zaheer decides to quit the underworld and arranges a meeting with Maqsood in Dubai regarding the same. While Nana Mhatre is looking to take his revenge from Zaheer, Maqsood sets an elaborate trap for Zaheer while sitting in Dubai.
08 Apr '20
S1 E4 . The Big Hunt
After Zaheer returns to Bombay post his meeting with Maqsood in Dubai, he is kidnapped from the Bombay airport, right from in front of Ashraf’s eyes. Inspector Tawde has Zaheer in his custody and decides to take advantage of the situation for his own profit.
08 Apr '20
S1 E5 . The Turmoil
Ashraf learns about Zaheer’s brutal murder and another shocking news about losing her baby and the double dose of shocking news leaves Ashraf utterly devastated. Driven by her grief and rage, Ashraf realizes that she has nothing to lose and becomes determined to have her revenge for her dead husband and her child.
08 Apr '20
S1 E6 . The Defeat
Following the exposure of Inspector Tawde and Bhoir, and after the reveal of the collaboration between Ashraf and Anjali, Ashraf starts feeling threatened for her life and decides to take the help of the law. She files a case against Inspector Tawde and Nana Mhatre for conspiring against her husband and for killing him. Ashraf fights tooth and nail in the court of law against the injustice but ends up facing defeat due to the connections that a gang lord like Nana Mhat
08 Apr '20
S1 E7 . The Transformation
When Ashraf sees that all her legal avenues have been shut tightly because of the politicians being corrupt and the law being in their control, she decides to take the other route available to her on her way to complete her revenge. She tries to arrange a meeting with Bhai Chavan, who is Maqsood’s rival and has his own gang and his own presence.
08 Apr '20
S1 E8 . The Honey Trap
Upon seizing the drugs, the sub-inspector, Vikram Bhosale reveals to the media that the drugs have been supplied by Nana Mhatre gang. Meanwhile, the union leader meets with Ganpat Rao to discuss the problems faced by labourers. Later, a shooter from the Nana Mhatre, Swatya, the gang makes a visit to the bar to find Sapna there. He develops an instant liking for her.
08 Apr '20
S1 E9 . The Taste Of Blood
Swatya arrives to kill Tawde and Bhoir. He opens fire and sub-inspector Bhoir gets severely injured. While Tawde goes to Nana on the lookout for Swatya in order to kill him, Ashraf sets out to the hospital Bhoir is admitted to and kills him.
08 Apr '20
S1 E10 . The Game Becomes Ugly
After her plan fails, Ashraf gets caught in tuff with Swatya. After a lot of struggle, Ashraf is able to get out of the situation, when someone unexpected comes to her rescue. A grieving Nana summons Sapna to question her about Swatya’s death. She plays her smart game once again and informs Nana Mhantre about Bala Mama.
08 Apr '20
S1 E11 . The Ultimate Seduction
Anjali meets with Ashraf and warns her that her way of getting justice is dangerous and might pose a threat to her. Ashraf tips off Bala Mama’s location after trapping him in her honey trap. He is killed brutally by Nana Mhatre’s men. As promised Nana offers a large sum of money to Ashraf for doing the job.
08 Apr '20
S1 E12 . The Big Catch
Ashraf, as Sapna, makes her way up to the home minister, Ganpat Rao Kadam. She promises to make his night memorable and then seduces him. Later, she finds vital information and a huge amount of drugs at the home minister’s farm house.
08 Apr '20
S1 E13 . The Countdown Begins
Sub-inspector Vikram Bhosle arrests Nana Mhatre. On their way to the station, Nana senses a connection between Vikram and Sapna. Ashraf leaks the news of the Home Minister’s arrest to the media and the reports of the Home Minister involved in the big scam travel fast. Nana Mhatre orders Tawde to fetch information of Sapna. After knowing the full truth about Ashraf, Vikram gets married to her.
08 Apr '20
S1 E14 . The Final Encounter
Ashraf decides to kill Maqsood in Sharjah while he enjoys the India-Pakistan cricket match. Nana punishes himself for trusting a woman, while Tawde finds out about Virkam’s marriage and realises that Sapna is in fact, Ashraf. Ashraf sees this as an opportunity and ends his chapter. She then calls Nana at Sassoon Dock and incidentally Bhai Chavan follows.
08 Apr '20