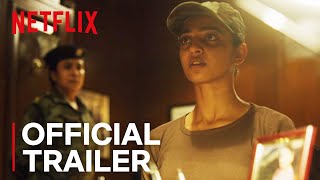 Nida Rahim is a newly produced military officer who is fiercely loyal to the authoritarian regime and does not hesitate to even report her own father for misconduct. She is appointed at a covert military detention centre to interrogate Ali Saeed, a recent prisoner. However, he turns the tables on his interrogators, exposing their most shameful secrets.
Ghoul is Hindi Horror web series with Radhika Apte and Manav Kaul in the lead role. It is currently streaming at Netflix.

Where to watch season 1 of Ghoul online?

You can watch season 1 online here at Netflix .

S1 E1 . Out of the Smokeless Fire
After exposing her father’s anti-government activities, Nida Rahim is inducted as the newest interrogator at the remote Meghdoot 31 detention center.
24 Aug '18
S1 E2 . The Nightmares Will Begin
Flashes of the past begin to haunt Nida. When sect leader Ali Saeed is brought for questioning, his unnerving answers lead her to suspect his motives.
24 Aug '18
S1 E3 . Reveal Their Guilt, Eat Their Flesh
Nida learns of the ghoul inhabiting Saeed. Upon telling her fellow interrogators, she learns the alarming truth about what its presence reveals.
24 Aug '18