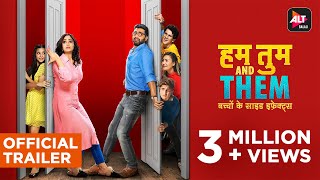 Hum Tum and Them Trailer

Loading...
Streaming options for Hum Tum and Them Season 1

Where to watch season 1 of Hum Tum and Them online?

You can watch season 1 online here at ZEE5 and ALTBalaji .

The full cast of Hum Tum and Them includes Shweta Tiwari, Akshay Oberoi, Trupti Khamkar and Bhavesh Bhanushali. Shweta Tiwari has also worked in shows Kasautii Zindagii Kay and Mere Dad Ki Dulhan and movies like Madhoshi, Bin Bulaye Baraati and Benny And Babloo. Akshay Oberoi has also worked in shows Flesh, It's Not That Simple and Bar Code and movies like Kaalakaandi, Pizza and Junglee. The creator of the show is not known at this time.

S1 E1 . Mother India meets absentee father
Shiva is struggling to be the best mother to her teenage daughter. Yudi is struggling to shed the responsibility of his three children that he is thrust with. Shiva involuntarily goes on a solo vacation, she meets Yudi and pours her heart out to him.
06 Dec '19
S1 E2 . Jee Le Zara
Shiva accepts Yudi’s invitation to spend time with him. They have a great time, and Yudi kisses Shiva. Meanwhile, Jahan arrives to meet Shiva. However, Jahan is upset as she feels neglected by her parents. Shiva questions her husband for letting Jahan travel all alone.
06 Dec '19
S1 E3 . Love, Sex Aur Bachche
As Yudi spends more and more time with Shiva, he comes off as an increasingly irresponsible dad for Aryan, and he doesn’t do much to change either.
06 Dec '19
S1 E4 . Kids problem buffering, love suffering
Jahan and Shiva return from their vacation. Yudi’s children come to stay with him for three months. Shiva meets Yudi and tells that they cannot be together as she wants to concentrate on her daughter.
06 Dec '19
S1 E5 . Bachon ke side effects
Shiva desperately tries to appease her daughter but keeps failing. Disheartened, she even rejects Yudi’s plea to give them a second chance when he comes to apologize to her. Meanwhile, Vyoma attends a wild party without informing her dad or her brother Aryan.
06 Dec '19
S1 E6 . Friend zoning
The blame game continues between Shiva and Nikhil as he accuses her of forcing their daughter to go to a hostel. Fed up of her mother’s constant judgments, Shiva asks her mother to leave the house. Later, Shiva goes back to Nikhil.
06 Dec '19
S1 E7 . Kuch Iss Tarah
Jahan agrees to stay with her parents if they start staying together like a happy family. But their act fails when Jahan catches them arguing.
06 Dec '19
S1 E8 . Theher Jaa Dil
Now homeless Shiva moves in with Yudi. Nikhil accuses Shiva of breaking their family. Yudi’s children start speculating over Shiva and Yudi’s relation.
06 Dec '19
S1 E9 . Ki Karna ….?
Shiva gradually becomes a part of Yudi’s household. Jahan arrives at Yudi’s home looking for Shiva as chooses to stay with her instead of her father, Nikhil.
06 Dec '19
S1 E10 . Don’t go Shiva!
When Shiva decides to leave Yudi’s house, he realizes how much she means to him. Meanwhile, Jahan accidentally sees Yudi’s phone with compromising pictures of her mother.
06 Dec '19
S1 E11 . Shiva 2.0 Meets Yudi 2.0
Vyoma and Jahaan join hands to separate Yudi and Shiva. While Vyoma hatches the plan, Jahaan executes it. However, the seemingly foolproof plan goes awry, and Yudi confesses his past to Shiva.
06 Dec '19
S1 E12 . Heartbreak Hotel
Shiva breaks up with Yudi. The mother-daughter duo leaves Yudi’s home, leaving OJ battling with anxiety. The next day, Jahaan meets Yudi and asks him if he loves Shiva. She further tells Shiva that Yudi lied to save her. Later, Shiva confronts Yudi and warns him to not interfere in her daughter’s life.
06 Dec '19
S1 E13 . A Second Chance
Shiva and Yudi confess their love to each other. Yudi throws a party to celebrate their union. As everything seems to go well, Aryan tells Shiva the truth about his mother’s death and warns her that a similar fate awaits her as well.
06 Dec '19
S1 E14 . Hum, Tum and Us?
Shiva considers Yudi’s past and feels being with him may not be such a good idea. OJ desperately wants Yudi and Shiva to come together. Meanwhile, Aryan argues with his two siblings.
06 Dec '19
S1 E15 . Mehroom Dil
Everything comes crashing down as insecurities and fear take the better of everyone. Arya and Yudi get violent, and one of them ends up severely injured. Will Shiva and Yudi overcome their inhibitions and find love again?
06 Dec '19