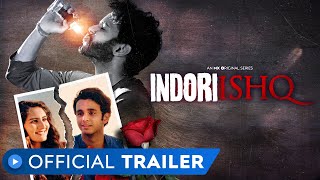 The story begins with amusing attempts of twelfth-grader, Kunal, to woo his classmate, Tara. Kunal finally manages to propose to Tara and their love story begins.After his schooling, Kunal leaves Indore and moves to Mumbai to join a Naval College. Soon his sober life turns upside-down when Tara dumps him for someone else. In no time, Kunal turns into an alcoholic and chain smoker, and without taking admission in the naval college, he moves to a weird rundown room in Darukhana, spending days doing nothing but drinking, smoking, and missing Tara.
Indori Ishq is Hindi Drama web series with Ritvik Sahore and Vedika Bhandari in the lead role. It is currently streaming at MX Player.

Where to watch season 1 of Indori Ishq online?

The full cast of Indori Ishq includes Ritvik Sahore, Vedika Bhandari, Aashay Kulkarni, Donna Munshi, Tithi Raaj and Dheer Hira. Ritvik Sahore has also worked in shows Flames, TSP's Awkward Conversations and Awkward Conversations With Girlfriend and movies like Ferrari Ki Sawaari and The Twist . The creator of the series is Samit Kakkad, who has also created films like Half Ticket, Aayna Ka Bayna and Ascharya Fuck It.

S1 E1 . Episode 1 - Tum Toh Thehre Pardesi
Indori Ishq is a story about love, romance, and the passion that comes with it. Kunal has been in love with his classmate Tara for a long time now but hasn’t had the courage to propose to her. Both of them go to an Altaf Raja concert one night and that is when Kunal asks her out finally. He had tried to propose to her in the past as well but had failed twice.
10 Jun '21
S1 E2 . Episode 2 - Love, Sex Aur Consent
Kunal and Tara are in love with each other and decide to have a long-distance relationship when Kunal heads to Mumbai for college. As he gets there, with the help of his uncle, he finds a plush apartment to live in along with two other people, Kamna and Mahesh. As the entrance exams for colleges come near, Kunal is submerged in his books and wants to get into Naval College.
10 Jun '21
S1 E3 . Episode 3 - Love Mein Lagi Hai
Kunal refuses Kamna’s proposal and tells her that he is in love with Tara and that she would have to move on. On the other hand, Kunal and Mahesh both clear their entrance exams and get top-ranking positions that get them into Naval College, Mumbai. Before getting into college and beginning with his studies, Kunal wants to share this happiness with Tara and decides to visit her in Indore.
10 Jun '21
S1 E4 . Episode 4 - Awaara
Upset and heartbroken, Kunal leaves his plush apartment and he has now shifted to a small room in a shady place called Darukhana. Still reeling with his breakup, Kunal spends days doing nothing but drinking and smoking. There, he meets Reshma who is a property broker by day and a call girl by night. Reshma’s life is as messed up as Kunal’s.
10 Jun '21
S1 E5 . Episode 5 - Rebound
Kunal’s life takes a new turn when he meets Aliya. Kunal falls in love with Aliya, who is a friend of Kamna. However, all his hopes go down the drain when he finds out that Aliya is in a relationship. When Aliya’s boyfriend dumps her, Kunal regains his confidence and tries to find a way to make Aliya fall in love with him.
10 Jun '21
S1 E6 . Episode 6 - Brahmastra
Mahesh shares his plan with Kunal and ensures that it will help him win any girl he wants. Mahesh gets him familiar with ADC, it stands for Attachment, Detachment and Commitment. Even though hesitantly, Kunal behaves and acts as per Mahesh’s plan.
10 Jun '21
S1 E7 . Episode 7 - Full Circle
One year has passed since Kunal’s life wrecked hell. Just when he is in a much better state now, he gets a distressed call from Tara that makes him leave everything behind and fly back to Indore. Upon meeting Kunal, Tara tells him about how Ronit is blackmailing her to leak her personal photos in public.
10 Jun '21
S1 E8 . Episode 8 - Fanaa
Everything is rainbows and unicorns yet again for Kunal. Having Tara back in his life, he leaves his job and everything in Mumbai to settle down in Indore permanently. The couple has the best time of their lives finding solace in each other’s company and rekindles their romance and passion. Tara even proposes marriage to Kunal and he happily accepts.
10 Jun '21
S1 E9 . Episode 9 - Tharki
Kunal had doubts about Tara and Pratyush, and now he has caught them both red handed. The night for him is long and filled with thoughts of rage, vengeance and sadness. He decides that he would kill Tara, this would be her punishment for what she has done to him, and then kill himself too. He buys a revolver and loads it, he points it at Tara. Would he shoot her? Would this be the end of Tara and Kunal?
10 Jun '21