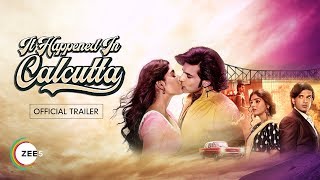 It Happened In Calcutta Trailer

Loading...
Streaming options for It Happened In Calcutta Season 1

Where to watch season 1 of It Happened In Calcutta online?

You can watch season 1 online here at ZEE5 , ALTBalaji and ALTBalaji .

S1 E1 . Summer of 62
Kusum is enthusiastic about her first day at college as the first female MBBS student. Catching Ronobir and a faculty in an intimate position puts her down, only to be cheered back up by Ratan and Charulata. She tries avoiding Ronobir, as she was aware of his kind.
29 Feb '20
S1 E2 . One in Hand, One in the Bush
Charu tricks Kusum and invites her to the party a day before her exam. Being disappointed by her performance, she rushes towards Ronobir to give him a piece of her mind, but a situation arises, and they end up performing a successful surgery along with Ratan. Ronobir drops Kusum home after a long day at college and heads back to his place to meet up with his and Sujata’s families.
29 Feb '20
S1 E3 . All is Fair in Love and War
It’s the prom fever, and Ronobir wants Kusum to go out with him, but she does not want to be his date. Sujata arrives at Ronobir’s college, looking to invite his collegemates for the surprise birthday party that she has been planning. Sujata makes an announcement at the party, and so does Ronobir.
29 Feb '20
S1 E4 . It Happened at the Prom
Ronobir drops Sujata to the airport as she is on her way to England. Kusum is dreaming of Ronobir showing up to ask her out for prom, but he never did. Kusum arrives at the prom with Ratan and immediately gets furious to see Ronobir with Charulata. She confesses her feeling for Ronobir out of jealousy. Kusum meets an old friend while at the movies.
29 Feb '20
S1 E5 . It must have been Love
Kusum happily tells Ronobir about her pregnancy, but Ronobir isn’t happy about the news. Instead, he convinces her to abort the child, and so she does with the help of Ratan. But she was disappointed that Ronobir never showed up during the operation. So she plans to visit him.
29 Feb '20
S1 E6 . Time after Time
It has been 9 years. Kusum has moved on in her life and is now working as an army doctor. When Ratan proposes to her, she happily agrees. Dr. Ronobir Chatterjee is reintroduced to Kusum as a specialist for Cholera and help her fight the disease.
29 Feb '20
S1 E7 . Still in Love with you
Ronobir and Kusum have an argument. Actress Monalisa once again arrives at the hospital. Ronobir throws a party to celebrate the hospital’s success in fighting Cholera.
29 Feb '20
S1 E8 . Take my Breath away
Ronobir heads home to his daughter after dropping Kusum to her house. Ratan tells Kusum about the invitation to the college reunion, and that he isn’t interested in attending. Kusum meets some of her old friends at the party and discovers some new information about Ronobir.
29 Feb '20
S1 E9 . What hurts the Most
Kusum finds out about Ratan’s secret when she suddenly lands up at his place to talk to him. Since India and Pakistan are at war, Ronobir and his team will now have to treat the wounded soldiers too. However, Ronobir must head home due to an emergency. Kusum goes to Ronobir's house and discovers an unnerving fact.
29 Feb '20
S1 E10 . And, I will Always Love you
Kusum volunteers for a posting at the border to keep herself away from Ronobir. Mr. Dasgupta informs Ronobir about the impending doom that awaits Kusum and the other doctors at the border camp. Ratan gathers a group of Naxalites to help him rescue Kusum and Ronobir decides to join him. The team successfully rescue Kusum, but at a hefty cost.
29 Feb '20