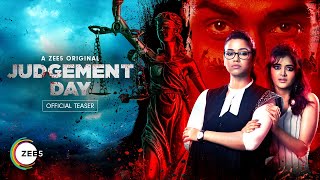 Where to watch season 1 of Judgement Day online?

The full cast of Judgement Day includes Madhumita Sarcar and Sohini Sarkar. Sohini Sarkar has also worked in shows Manbhanjan and movies like Phoring, Cinemawala and Bibaho Obhijaan. The creator of the show is not known at this time.

S1 E1 . The Mystery of a Missing Girl
The police refuse to take action when Diya approaches them to file a missing complaint of her sister Hiya. A mysterious voice tells her that Hiya is in danger.
05 Feb '20
S1 E2 . Raped, Drowned and Killed
Santa and Rahul’s friends are worried about what they have done. The police discover the body of a woman who has been raped and drowned.
05 Feb '20
S1 E3 . A Floating Body
Kingshuk is not confident about Javed’s capability. Meanwhile, Hiya’s condition gets critical, and Javed meets Mac only to be surprised.
05 Feb '20
S1 E4 . Meet Me at 1AM
Diya’s family is in a state of shock. Javed interrogates multiple suspects while Diya gets a mysterious message.
05 Feb '20
S1 E5 . Sixth Sense
Mac visits Hiya, and Kingshuk gets suspicious about Javed’s motive. Diya meets the mysterious witness, and Lucky discovers something scary.
05 Feb '20
S1 E6 . Date Rape Drug
Hiya’s family is devastated, and Mac’s mission is fulfilled. Meanwhile, Mousumi discovers the body of an unknown person in a mysterious way.
05 Feb '20
S1 E7 . I Quit
Kingshuk gets suspicious about Diya and Javed’s relationship. A video tells Hiya about her perpetrators, while Lucky and Buni discover a shocking truth.
05 Feb '20
S1 E8 . Arrest Those Scoundrels!
Javed starts arresting the suspects. Meanwhile, the police commissioner asks Javed to drop an important case.
05 Feb '20
S1 E9 . A Trail of Blood
Mousumi discovers what happened that night. Ankush confesses his crime, and Lucky finds a trail of footsteps in Buni’s flat.
05 Feb '20
S1 E10 . After the Verdict
The mystery of the blue jacket is solved and Javed faces humiliation. Meanwhile, Hiya goes missing.
05 Feb '20