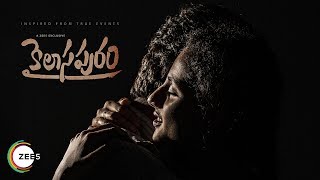 Where to watch season 1 of Kailasapuram online?

The full cast of Kailasapuram includes Snehal Kamat, Mohit Pedada, Shiva Prasad R Brindavan Naidu Ketireddy and Ram Nallamilli. There are fresh faces in the cast and no reference to any previous show or films is found. .

S1 E1 . Caught with the weed
Shiva's gang, the happy-go-lucky teenagers, continues with its business of smuggling weed as usual.
05 Jun '19
S1 E2 . Raju gets killed
Shiva learns about Raju’s death and gets to know about the danger that lies ahead. Simultaneously, both Shiva and Sailaja get suspended from the college. In the meanwhile, Parvatheesam and Govind Krishna are attacked in different incidents. Who is Parvatheesam's attacker and what's Shiva's next plan?
S1 E3 . Shiva's life is in danger
Dhanunjay warns Shiva to deliver the weed at any cost. At the same time, Shiva gets to know about Sailaja’s past. In the meawhile, Ramaredddy asks Parvatheesam to collect a few details about Mohan Rao. Does Parvatheesam get to know about Mohan Rao’s past and does Shiva manages to follow Dhanunjay's order?
S1 E4 . The master plan
When Shiva and his family decide to leave town, an ugly incident makes Shiva change the plan. In the meanwhile, Parvatheesam introduces two constables to Rama Reddy, and together they plan to bring an end to the smuggling business.
S1 E5 . Parvatheesam's quest for the secret
Rama Reddy’s team interogates Seenu but they fail to extract any information from him. In the meanwhile, Shiva goes in search of Govind Krishna, the person who put him in trouble. Parvatheesam gets to know about a secret and ventures to unearth it. Where is Parvatheesam heading to?
S1 E6 . Who is the culprit?
When Shiva and Sailaja fail to locate Govind Krishna, they leave the town. Parvatheesam asks Rama Reddy to get him out of the crime he committed. Will Parvatheesam come out of this ordeal? What happens to Mohan Rao?