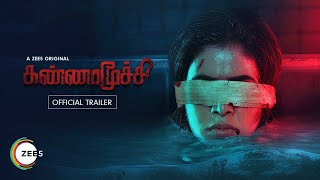 Where to watch season 1 of Kannamoochi online?

S1 E1 . The 6th Floor
After Priya and her daughter Aishu relocate to an apartment in Chennai, Priya finds something strange and unusual about the 6th floor in the apartment. Later, when Priya and Aishu go to the supermarket, Priya loses her wallet. The next day, in an unusual way, Priya finds Aishu missing.
13 Mar '20
S1 E2 . Aishu goes Missing
Priya, along with Santosh, starts to search for Aishu. Soon, Priya meets a strange young girl at the park who says Aishu is playing with her, however, Priya ends up losing the girl. Later, Priya files a police complaint and returns to her apartment, only to find that little girl standing in front of a door on the 6th floor. When Priya breaks open the door and goes inside, a shocking truth awaits her.
13 Mar '20
S1 E3 . The Puzzle
After the inspector arrives at Priya's apartment, she tells the inspector about the little girl. While the police start their investigation, Santosh decides to help Priya in finding the little girl. On their quest to obtain more information, Santosh and Priya go to the writer's house who was initially part of the missing girl's investigation. Later, the duo go to Loudersamy's house to obtain more details about the little girl and her family.
13 Mar '20
S1 E4 . The Haunted Memories
After Priya and Santosh go through the evidence box of Loudersamy, they find a tape that contains the details about Manju's family. While Poorna and Santosh go the asylum in search of Balu, Priya returns home to watch the tape. After realising the daring truth about the family, Priya decides to bring Balu home and recreate Manju's birthday from the video. However, when Balu watches the decoration, he gets reminded of Manju's celebration and runs away. Seeing the entire situation, Poorna feels he
13 Mar '20
S1 E5 . The Unknown Search
While Priya goes in search of Balu, she finds him outside a house. Upon entering the house, Priya starts to search for her daughter. Soon, she finds a room filled with toys and clothes. As Priya enters a room with frozen bodies of kids, she panics and intensifies her search for Aishu, along with Balu and Santosh. Will Priya find her missing daughter Aishu?
13 Mar '20