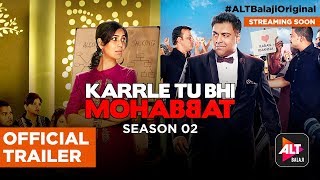 Karan Khanna is a recovering alcoholic who, along with his counsellor Tripurasundari Nagrajan, takes a detoxification trip to Mahabaleshwar. The story takes a turn when he attends his estranged daughter's wedding with Tripurasundari Nagrajan and discovers why opposites truly attract. Will their romance blossom? Or will it be just another page in their contrasting lives?
Karrle Tu Bhi Mohabbat is Hindi Drama-Romance web series with Ram Kapoor and Sakshi Tanwar in the lead role. It is currently streaming at ALTBalaji and ZEE5.

Where to watch season 1 of Karrle Tu Bhi Mohabbat online?

You can watch season 1 online here at ALTBalaji , ZEE5 and Youtube .

S1 E1 . Do Akele Shehar Mein
An arrogant, fading superstar, and a humble, caring doctor – does destiny have its own plans for them?
16 Apr '17
S1 E2 . Kabhi Haan Kabhi Naa
Karan’s last effort to revive his career lands him in front of an unintimidated Tripura. Will they get along?
16 Apr '17
S1 E3 . Humsafar
Tripura is at her professional best. But she’s not prepared for Karan’s plans for her. Will they find some common ground?
16 Apr '17
S1 E4 . PATI PATNI AUR WOH
A questionable character, a failed marriage, and an estranged daughter. The arrogant actor has his own reasons to frown while Tripura struggles with a case of mistaken identity.
16 Apr '17
S1 E5 . KHEL KHEL MEIN
Trisha’s bitterness hurts Karan. A meltdown takes him to his extremes. Will Tripura be able to pull him back from the edge?
16 Apr '17
S1 E6 . BAIRI PIYA
Tripura foils Karan’s escape plan. How long will the alcoholic avoid his therapist?
16 Apr '17
S1 E7 . BANDINI
Karan comes to Tripura’s rescue. But there is a hidden price to it. Will Tripura be able to handle it?
16 Apr '17
S1 E8 . AUR PYAAR HO GAYA
A confrontation, followed by a fallout, followed by a surprise visit from a very important person. Karan and Tripura both begin to discover new sides of each other’s personalities.
16 Apr '17
S1 E9 . UFF YEH MOHABBAT
As Karan tries to set things right with Tipsy, things take a strange turn as she misinterprets his honest intentions.
16 Apr '17
S1 E10 . PYAR KE SIDE EFFECTS
Karan’s closeness to Tripura’s family leaves her awestruck. Will she go with the flow or will Karan hit a dead end?
16 Apr '17
S1 E11 . EK LADKI KO DEKHA
Karan’s feelings for Tripura lend a new meaning to his life. Is this the beginning of a love story or is Karan headed for another disappointment?
16 Apr '17
S1 E12 . KISSA ANGOOTHI KA
Karan vows to unite with the love of his life. Will Tripura be able to understand her own feelings towards Karan?
16 Apr '17
S1 E13 . DULHAN HUM LE JAYENGE
Two men in love with the same woman. Who will win her heart? Will Karan give up so easily?
16 Apr '17
S1 E14 . KUCH NA KAHO
Tripura defends Karan in front of his family. Will this mark the beginning of their love story?
16 Apr '17
S1 E15 . HUM TUM
Karan is faced with a sudden choice between love and unforeseen responsibilities. Will this be the end of Karan and Tipsy's newfound understanding?
16 Apr '17