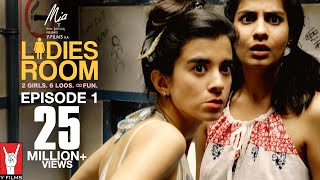 Ladies Room is the raunchiest Y-Films series featuring its wildest leads, Dingo and Khanna. This is a story of two besties and the mental adventures they go through in six different loos over the six-episode series. It is a show about modern young ‘girl bros’ struggling to grow up even as they grow old. These girls are mad, bad and completely unapologetic about it!

Where to watch season 1 of Ladies Room online?

The full cast of Ladies Room includes Shreya Dhanwanthary, Saba Azad, Jagdish Rajpurohit and Adhir Bhat. Shreya Dhanwanthary has also worked in shows Scam 1992 - The Harshad Mehta Story, The Reunion and A Viral Wedding and movies like Cheat India and Sneha Geetham. Saba Azad has also worked in movies like Mujhse Fraaandship Karoge. The creator of the series is Alan Taylor, who has also created films like Thor: The Dark World, Terminator Genisys and Palookaville.

S1 E1 . Dingo & Khanna Get Caught With Pot
Travelling from Goa to Mumbai, Dingo & Khanna are living their routine life, smoking up & chilling. Things go south when they are encountered by 35 policemen on the go. What happens next?
31 May '16
S1 E2 . Dingo & Khanna Preggers Or Not?
Khanna suspects herself of being pregnant. One silly mistake and they find themselves in a flood with floating shit.
31 May '16
S1 E3 . Dingo & Khanna on Dicks, Pics & Dick-Pics
The third episode finds Dingo & Khanna in a maternity clinic, where they must deal with a grumpy boss, a judgemental nurse and a horny work colleague, apart from Khanna’s accidental pregnancy, of course.
07 Jun '16
S1 E4 . Dingo & Khanna Tripping Balls
Dingo is worried she might fuck up the one job given to her by the Evil Raveena and a reckless Khanna downing her drinks is not helping. With alcohol and MDMA flooding her system, Khanna blurts out major life secrets while a struggling Dingo tries to tackle her.
14 Jun '16
S1 E5 . Dingo and Khanna's Peep Show
Dingo struggles to get Under Gogo Ka Ghagra but ends up under a furious Khanna who is trying to get over Kunal! With a whole lot of vomit and a tinge of piss, Dingo and Khanna find themselves in a massive mess, yet again.
21 Jun '16
S1 E6 . Dingo & Khanna & GCPD
n the Season Finale of Ladies Room, Dingo & Khanna, in the struggle to find jobs, are encountered by annoying young people who think they are ready to rule the world!
05 Jul '16