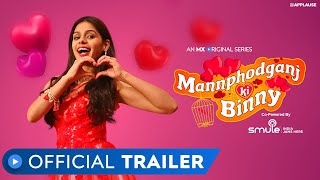 Binny Bajpai is a 21-year-old, dreamy-eyed girl, from the suburb of Mannphodganj in erstwhile Allahabad, now known as Prayagraj. Her conventional middle-class parents Brajesh and Kumud are on the lookout for the perfect virtuous boy for her. However, fiery and rebellious Binny is on her own hunt. She has set her eyes upon someone who is her ticket out of Mannphodganj. But all is not rosy for Binny. Will Binny finally find her own identity and live the life of her dreams?

Mannphodhanj Ki Binny, is inspired by the book called Band Baaja Boys, written by Rachna Singh. The web show is directed by Vikas Chandra and the screenplay is written by the talented Amitosh Nagpal. The drama comedy presentation by MX Originals stars Pranati Rai Prakash in the title role of Binny Bajpai, and she is supported by a group of talented and veteran actors like Atul Srivastava, Alka Kaushal, Anurah Sinha, Fahmaan Khan, Abhinav Anand, Kritika, Aru Krishank, and Samar Vermani. Watch the
Mannphodganj Ki Binny is Hindi Drama web series with Pranati Rai Prakash and Anurag Sinha in the lead role. It is currently streaming at MX Player.

Where to watch season 1 of Mannphodganj Ki Binny online?