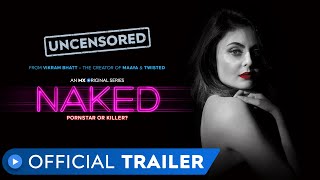 Hotelier Rishabh Mehta is found murdered. An honest cop, Suraj Kadam, begins investigating the case and meets Natasha Kamra, the prime suspect, who is also a porn star by profession. Will Suraj be able to find the real killer? Is Natasha really guilty or is she just an easy target?
Sometimes, the truth is nothing but just a naked illusion.
This is a murder mystery revolving around a cop whose life takes a turn while he starts solving the case.
Naked is Hindi Drama-Crime web series with Suparna Moitra and Aryaman Seth in the lead role. It is currently streaming at MX Player.

Where to watch season 1 of Naked online?

The full cast of Naked includes Suparna Moitra, Aryaman Seth and Tithi Raj. There are fresh faces in the cast and no reference to any previous show or films is found. The creator of the series is Anupam Santosh Saroj, who has also created shows Twisted and Rain.

S1 E1 . The Murder
Naked web series’ premiere episode begins with a man Suraj Kadam in a sinister dream, a nightmare in all probability. He sees himself in the mirror, instructing himself to wear slippers while a girl forcefully injects a syringe in his body. Next morning, the man visits his doctor who also happens to have saved him in the past. The man is a police officer who begins to narrate his story of how his life went from being perfect to in shambles.
25 Mar '20
S1 E2 . Love Vs Duty
The second episode of Naked web show begins with Suraj’s parents busy with his wedding preparations. His fiance asks him to help her select a necklace but Suraj is too occupied with the case files. Suraj visits Natasha at her home, the very place where Rishab was brutally stabbed to death.
25 Mar '20
S1 E3 . Did she, did she not?
Suraj and CID officer Sapna visit Natasha after she gets attacked. She reveals she was going up to her bedroom when she felt someone was there in the kitchen. Natasha went into the kitchen to check and was attacked with a rod on her head. Suraj deduces that the attacker is the same person who killed Rishabh. Natasha gets anxious if the suspect could come back and try to take her life this time.
25 Mar '20
S1 E4 . Down the Memory Lane
Suraj sets out to prove Natasha’s innocence. His behaviour towards a murder suspect was grabbing eyeballs from all corners, especially Sapna’s. Rishabh Mehta’s murder case goes to trial and Natasha is presented in the witness box as a suspect. The doctor, however, rules out the possibility by stating that she was injected with a drug before the murder.
25 Mar '20
S1 E5 . Dangerous Love
Suraj drops Natasha home and takes her leave. Tambe sees Suraj getting close to Natasha and asks him to go home. Suraj gets back home late and gets a call from his fiance Simmi. He is on a call with Simmi but finds himself thinking about the moments spent with Natasha. He then dreams of himself with Simmi in his car only to find Natasha sitting there later. However, Natasha tells him that it is now her place.
25 Mar '20
S1 E6 . Crossroads
Suraj’s mother gets irked again because he still hasn’t applied for leave. She asks him if he is serious or not. Suraj very casually asks her to postpone the wedding. Suraj’s father tries to talk to him. He makes him understand why his mother gets angry and only wants the best for her son. Suraj goes to Natasha’s house. He is stopped by Tambe but he assures him he is now doing well.
25 Mar '20
S1 E7 . Broken Trust
Sapna visits the store where Suraj’s friend Vijay works. Since Vijay had joined a week after the robbery that took place at the store, the manager asks him to directly communicate with Sapna. It is revealed that the store is located right in front Natasha’ residence. Vijay discloses to Sapna that his friend Suraj is handling the Natasha Kamra case, not knowing Sapna is working on it too.
25 Mar '20
S1 E8 . Ace up the sleeve
Sapna hijacks the Rishabh Mehta murder case from Suraj. She even gets all his team members on her side. News channels flash the breaking headline that Suraj started dating Natasha during the investigation of her former flame’s death. As he enters home, Suraj finds his parents finding out about the affair. His mother slaps him while his father feels ashamed. He asks Suraj to pack his bags and leave. Suraj pleads for forgiveness but all in vain.
25 Mar '20
S1 E9 . The beginning of the end
Surinder Sharma is convicted in the Rishabh Mehta murder case. Suraj and Natasha make love to each other and finally fall asleep. Suraj wakes up and leaves for his own place. Despite the case being shut, Suraj still faces troubles with the recurrent dreams. The story now moves to the first scene where Suraj had a nightmare of a girl injecting a syringe into his neck. He tells the doctor the nightmares are trying to convey something.
25 Mar '20
S1 E10 . Russian Roulette
Suraj connects all the dots and puts all the missing pieces of the puzzle back together. He goes to Natasha’s house and points a gun at her. Natasha claims that Sharma paid for his evil deeds so why does he want to revisit the case again. Suraj reveals that Natasha had attempted suicide sometime ago. Rishabh had come with the intention of proposing to her but as he said ‘I love you’ but it was not something she was used to listening.
25 Mar '20