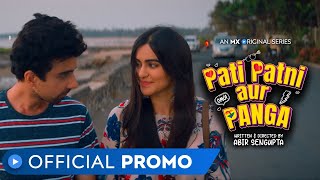 Small-time sub-broker Romanchak wanted his dull, run of the mill life to be "romanchak" but little did he know that marrying Shivani Bhatnagar would change life as he knew it, forever. 'Pati Patni aur Panga', is a 6 episode comedy-drama that explores what happens when a simple hunt for an apartment ends up in marriage, only for Romanchak to find himself stuck in a situation when he discovers a life-altering secret about his wife, Shivani.
Pati Patni Aur Panga is Hindi Drama web series with Adah Sharma and Naveen Kasturia in the lead role. It is currently streaming at MX Player.

Where to watch season 1 of Pati Patni Aur Panga online?

The full cast of Pati Patni Aur Panga includes Adah Sharma, Naveen Kasturia and Hiten Tejwani.Gurpreet Saini. Adah Sharma has also worked in shows The Holiday and movies like Hasee Toh Phasee, 1920 and Son of Satyamurthy. Naveen Kasturia has also worked in shows Pitchers, Bose: Dead/Alive and Social and movies like Sulemani Keeda and INT. CAFÉ – NIGHT. The creator of the series is Abir Sengupta, who has also created films like Indoo Ki Jawani and Jomer Raja Dilo Bor.

S1 E1 . Episode 1 - Meet The Stranger
While a 28-year-old Romanchak whines about his dull and boring life, luck shines on him as Shivani arrives at his doorstep. Romanchak is a sub-broker in Mumbai and Shivani in urgent need of accommodation in the city. A match made in heaven? Or a recipe for disaster?
11 Dec '20
S1 E2 . Episode 2 - A Quick Wedlock
Romanchak and Shivani find out that no flat owner is willing to rent out their flat to a single girl. This puts Shivani in a tough spot while Romanchak implements Jeetu's plans. He quickly convinces his parents to rent out a room of their house to Shivani where she can live as a paying guest until something better comes help. Shivani is thankful for Romanchak and he is elated to help her, but is this all Romanchak’s wants? Did Romanchak helping Shivani have ulterior motives? Is there more than
11 Dec '20
S1 E3 . Episode 3 - The Panga
As their friendship turns deeper, and both Shivani and Romanchak get romantically involved, Romanchak’s mother suggests that both of them should get married. With all everyone’s approval in place, soon Romanchak and Shivani get married. On the wedding night, Romanchak finds out that Shivani is a virgin. Little does he know that this is just the beginning of many more discoveries about his wife. What else will Romanchak find out about Shivani? Is there something Shivani is hiding?
11 Dec '20
S1 E4 . Episode 4 - Comedy In Tragedy
The truth is just too much for Romanchak to handle. He is not able to come to terms with the fact that Shivani had, by her own choice, undergone a sex change operation recently and now identifies as a woman. To make matters worse, Romanchak’s family also gets to know about this. Now that the cat is out of the bag, Romanchak decides to take a radical step of filing for divorce. Will Shivani agree to the divorce? Can Romanchak understand and respect Shivani’s decision?
11 Dec '20
S1 E5 . Episode 5 - See You In Court
Romanchak’s decision of filing for divorce is not met well by Shivani as she refuses to sign the papers. However, Romanchak does not stop there and he and his mother approach the courts. Just as their lawyer assures them that there is no way Shivani could win against them, Shivani presents yet another shocker to the mother-son duo. What does Shivani do? Who will win the case? Will Romanchak realise his mistake?
11 Dec '20
S1 E6 . Episode 6 - The Final Submission
After an intense court battle, Shivani had to face loss and ultimately had to sign the divorce papers. She walks out of Romanchak’s life. While Romanchak breathes a sigh of relief as he felt cheated not knowing about Shivani’s past, some part of him wants her back in his life. What will he do now? Will he go after Shivani? Will Shivani forgive him? Will the couple get their happy ending? Follow the journey of Romanchak and Shivani who fight a battle not only amongst themselves but also with
11 Dec '20