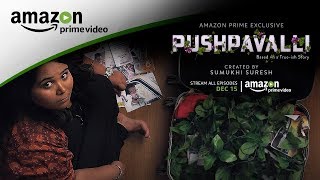 Pushpavalli was supposed to finish her Food Science degree and marry a Brahmin man that her mother approved of. All that changed after meeting the charming Nikhil Rao. After secretly following him to Bangalore, she juggles working at a children’s library, dealing with her unpredictable landlady, all the while trying to convince herself that it’s not stalking if you know the person, Right?
Pushpavalli is Hindi Drama web series with Sumukhi Suresh and Manish Anand in the lead role. It is currently streaming at Prime Video.

Where to watch season 1 of Pushpavalli online?

S1 E1 . Bhopal to Bangalore
Smitten after a chance encounter with the charming Nikhil Rao at a food conference, Pushpavalli Parasuraman moves from Bhopal to Bangalore to pursue him. Now desperate to figure out his whereabouts, Pushpavalli tries bribing a local chaiwalla with stolen data from her workplace in an attempt to to find Nikhil.
15 Dec '17
S1 E2 . Eagle Attack
Vasu threatens to throw Pushpavalli out of the PG if she doesn’t pay her deposit by the end of the day. An ornithologist that was scheduled to conduct a bird workshop at the library cancels after being attacked by an eagle. Pushpavalli steps in to host the workshop in the hope of earning some extra money, until she hears that Nikhil is outside T-boi's shop.
15 Dec '17
S1 E3 . Chutiya Chutney
Vasu agrees to let Pushpavalli cook breakfast for the PG after not being able to pay her deposit. Pankaj has a date with a girl he met at a cycling group. Pushpavalli finds out about a wine tasting event that Nikhil is attending. Not wanting to go alone, Pushpavalli tries sabotaging Pankaj’s date plans in the hope that he will then accompany her.
15 Dec '17
S1 E4 . Sab Scam Hai
Pushpavalli is coerced into meeting her mother’s Guruji who has made a trip to Bangalore. She bumps into Nikhil at the Guruji’s Ashram and is still embarrassed after their last meeting. Meanwhile at the library, Pankaj who now thinks Nikhil is the one stalking Pushpavalli, thinks she might be in danger.
15 Dec '17
S1 E5 . Bitch Is Back
Pushpavalli still has strong feelings for Nikhil but isn’t sure what he thinks. She decides to take him to a stand up comedy show where she hopes that a comedian will tease them as a couple and elicit a response from Nikhil. At the library, Pushpavalli receives a special package from her mother.
15 Dec '17
S1 E6 . PCOD
With all their cycles synchronized, it’s that time of the month for everyone at the PG. As a result, Pushpavalli has exiled herself from the PG kitchen, much to Vasu’s annoyance. Pushpavalli learns that Nikhil and Swati know each other. After hearing that Nikhil’s mother is unwell, Pushpavalli decides to use it as an excuse to turn up at his house.
15 Dec '17
S1 E7 . Finding Dukie
Vasu is furious at the girls after she finds someone has ‘done kaka’ on the terrace. Nikhil tells Pushpavalli that Dukie is missing. After helping search for his dog, Pushpavalli begins to panic when Nikhil tells her that Dukie is diabetic and hasn’t eaten since the previous day. At the library, Pankaj is greeted by a large German Shepherd.
15 Dec '17
S1 E8 . Look at Me
After getting fired from the children’s library and having Swati take credit for finding Dukie, Pushpavalli makes a last ditch attempt to get Nikhil’s attention: Breaking her leg. After all, Nikhil did help Swati’s son Arhaan when he broke his leg. Things don’t quite go according to plan and Pushpavalli goes further past the point of no return.
15 Dec '17