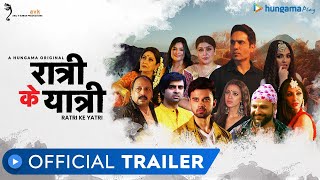 Ratri ke Yatri, Hungama Play's latest original show, is an anthology that narrates 5 unique and thought-provoking stories set in red-light areas. The show features an ensemble cast headlined by some of the biggest names from the television industry including Sudhir Pande, Anju Mahendru, Iqbal Khan, Barkha Sengupta, Parag Tyagi, Avinash Mukherjee, Shiny Doshi, Renee Dhyani, Mansi Srivastava, Reyhna Pandit and Akashdeep Arora, among others. Each story follows a character leading an incomplete life and seeking something - love, bodily pleasures, refuge or just closure - a man who is ashamed of being a prostitute's son and has an awakening in a place he detests the most; a 69 year old who is unapologetic about his sexual desires and refuses to be shamed by the society.
Ratri Ke Yatri is Hindi Drama web series with Barkha Sen Gupta and Avinash Mukherjee in the lead role. It is currently streaming at MX Player.

Where to watch season 1 of Ratri Ke Yatri online?

S1 E1 . Rupantran
When Rudra finds that his mother was a prostitute, he loses his wits and in a fit of rage, he visits a brothel to vent out his frustration. There he meets Nishaat a prostitute, who has a daughter. He insults Nishaat , who in reply makes him realize his folly. Rudra finds solace and returns back home.
21 Jul '20
S1 E2 . Age 69
Mr. Kakkad,69 is an elderly widower who spent his entire life in doing family duties, he tries to get what he missed before, bodily pleasure. His first two attempts failed. In his third attempt, he is insulted by a young prostitute, but all ends well when his situation understood by a middle-aged prostitute & then they both embark on a wonderful journey.
21 Jul '20
S1 E3 . Mukti
Nanhe, a wrestler is released from the Jail after 20 years after being falsely accused of Battery because of loving his Village Sarpanchs daughter. When he meets her in present time, he is ignored by her & the people of his village. He gets disturbed & gets drunk & finally finds solace in the arms of a prostitute.
21 Jul '20
S1 E4 . Dadhi Se Pehle Nari
Chakrapani is an 18 year old Brahmin boy who is going to take Sanyas, but is prompted by his friends to enjoy worldly pleasures one last time. He goes to a brothel, where he meets Katrina, and has sex. Overwhelmed, he leaves the brothel.
21 Jul '20
S1 E5 . Aakhari Raat
Garry, a conman who has vowed to leave cheating till he meets someone his match, meets Naina, A blind girl. Naina, being blind her other senses are hyperactivated and when Garry tries to cheat Naina, she realizes it. Garry realizes that too & understands he met his match & surrenders to Police.
21 Jul '20