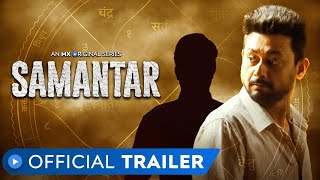 Samantar is a story about a young man known as Kumar Mahajan whose life changes after a man having a similar destiny known as Sudarshan Chakrapani enters his life. The life that Kumar is living, is the life that Chakrapani has already lived. Now, will Kumar be able to control his present or change his future after meeting Chakrapani is the story of Samantar. It takes us through a rollercoaster ride with uncertainty at every point.
Samantar, the web series is based on the book by the same name written by Mr. Suhas Shirwalkar. Produced by Arjun Singgh Baran and Kartik D Nishandar, Samantar marks the sixth collaboration between Marathi actor Swapnil Joshi and director Satish Rajwade. Swapnil and Satish have earlier dished out three hit films in the popular Mumbai-Pune-Mumbai movie franchise and have worked together on two television series too. Samantar web series features a star-studded cast that includes Pandit, Nitish
Samantar is Marathi Drama web series with Tejaswini Pandit and Swwapnil Joshi in the lead role. It is currently streaming at MX Player.

Where to watch season 1 of Samantar online?

The full cast of Samantar includes Tejaswini Pandit and Swwapnil Joshi. Tejaswini Pandit has also worked in shows Anuradha and RaanBaazaar and movies like Deva, Only You and Gaiir. Swwapnil Joshi has also worked in shows No 1 Yaari With Swwapnil and Eka Lagnachi Dusri Goshta and movies like Mitwa, Mumbai Pune Mumbai 3 and Ranangan (Marathi). The creator of the series is Satish Rajwade, who has also created films like Aapla Manus, Mumbai Pune Mumbai and Ti Saddhya Kay Karte.

Other Seasons for Samantar

S1 E1 . Identical stranger
Watch Samantar Premiere Episode Online in the best quality Samantar begins with Kumar Mahajan (Swapnil Joshi) talking to someone over the phone while driving a car. He tells the person that he lacks belief in the existence of God or gods. Soon after, he meets with a very bad accident and is shown gravely injured. The scene then jumps to Sharad Vapgaonkar taking his friend Kumar to meet a Swami. Owing to his disbelief in God or gods, Kumar is reluctant but Sharad insists. They enter an unclean sl
13 Mar '20
S1 E2 . Mishap
Catch Samantar all episodes online on MX Player Sharad is irked that Kumar didn’t share about his past with him. Kumar explains saying his misfortune knows no bounds. Swami completes his challenge of proving to Kumar that he has met him earlier. Swami presents the palm readings of a man called Sudarshan Chakrapani, who had visited him at the same age and under similar circumstances.
13 Mar '20
S1 E3 . Switch
Swapnil Joshi-starrer Samantar now streaming on MX Player Kumar goes to Ghatkopar to find out more about Sudarshan. An old man informs him that Sudarshan used to stay in Mumbai 40 years ago but left with his family after he committed a fraud in his company. Immediately after listening to this, Sharad tells Kumar that their boss have agreed to take him back and he has been transferred to Kolhapur.
13 Mar '20
S1 E4 . Blue Moon Cottage
Samantar web series is an edgy suspense thriller Next in Samantar, Kumar is invited by his superior for a dinner party to welcome him in Kolhapur. Kumar enjoys a drink with his boss; the boss asks Kumar to treat him like his elder brother and ask for anything without an ounce of hesitation. Kumar then expresses his desire to stay in the house, Blue Moon Cottage that he can see from his room’s window.
13 Mar '20
S1 E5 . The finding
Samantar web series plot will keep you hooked, booked and intrigued A man, who met Kumar about and assured him of knowing Sudarshan, turns up at Blue Moon Cottage unexpectedly. Late at night, he shows up and tells Kumar he doesn’t need his money. He further reveals that Sudarshan used to work at Imperial Woods Company. He also adds saying that after the man saved Sudarshan’s life, he’d come to the restaurant daily and have food.
13 Mar '20
S1 E6 . Sudarshan Chakrapani
Samantar web series on MX Player is a nail-biting drama Kumar takes a train to Karjat and thinks about the clues he thinks life is trying to give him. He enquires about Sudarshan, who was a manager at Malabar Woods. Kumar finds out that Sudarshan had met with an accident. The new manager directs Kumar to Ramchandra who had met Sudarshan years ago. Kumar asks Ramchandra who admits to seeing Sudarshan in Chiplun.
13 Mar '20
S1 E7 . Past Life Crisis
Tune in to Samantar in the best quality for free on MX Player Kumar finally meets Sudarshan Chakrapani. He tells him he has a lot of questions for him and too much to find out. Sudarshan cuts him and says he first needs to change his clothes since he got wet on the way to his home. Kumar feels cold and wishes he’d have whiskey. Just then Sudarshan offers Kumar some whiskey, presuming he likes it.
13 Mar '20
S1 E8 . The Diaries
Samantar all episodes now streaming on MX Player in Full HD Kumar and Sudarshan narrate their life instances to each other. Even the wound on their forehead is strikingly similar, just like other events that happened to them. Sudarshan tells Kumar that there should be some reason to bring two people with the same fate together. He also adds that their destinies are the same because the lines on their hands are similar and equally twisted.
13 Mar '20
S1 E9 . Twist
Samantar starring Swapnil Joshi is now available on MX Player Kumar starts walking to the station. He boards the train only to find out he dropped one of the diaries given to him by Sudarshan. He gets down and starts looking for the diary at the platform. In the meantime, he misses the train he was to take to get back to Mumbai. Somehow, Kumar, frustrated with all that happened on the way back, gets back to his residence.
13 Mar '20