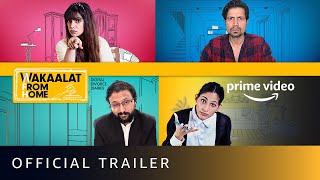 Wakaalat From Home is the story of Sujin and Radhika’s divorce. It is not amicable with claims and counterclaims. The judge decides, this not being a critical case, to move their court hearing over Video Conference. Over 10 court sessions, while the staying at home ensues, their divorce case will be heard, while their lawyers have designs of their own.
Wakaalat From Home is Hindi Drama web series with Sumeet Vyas and Gopal Datt in the lead role. It is currently streaming at .

Where to watch season 1 of Wakaalat From Home online?

Season 1 will stream online at .

The full cast of Wakaalat From Home includes Sumeet Vyas, Gopal Datt, Nidhi Singh, Kubbra Sait, Anuvab Pal and Rit Bahadur Bayalkoti. The show is stacked with the popular stars. Among the lead cast, Sumeet Vyas and Gopal Datt have also worked together in Official Chukyagiri in past. Sumeet Vyas has also worked in shows Permanent Roommates, TVF Tripling and Official Chukyagiri and movies like Parched, Guddu Ki Gun and High Jack. Gopal Datt has also worked in shows Pitchers, Humorously Yours and TVF Bachelors. The creator of the series is Rohan Sippy, who has also created shows Sidehero and films like Bluffmaster!, Nautanki Saala! and Kuch Naa Kaho.

S1 E1 . Divorce
Divorce proceedings begin. Radhika accuses Sujin of having an affair. Sujin accuses Radhika of being a lesbian. Someone's voice is heard at Sujin and Radhika's flat. A baby's voice is heard from Sujin's screen.
10 Sep '20
S1 E2 . Is Sujin Lying?
Radhika's therapist, Shilpi, has moved into her flat. Sujin thinks that Shilpi is Radhika's girlfriend. Radhika finds female clothing that proves Sujin is having an affair. It is revealed that Lobo is illegally running a Chinjabi restaurant during the lockdown. Sujin finally tells the truth about his living situation and the baby.
10 Sep '20
S1 E3 . Division
Lobo tries to bribe Rajni to manipulate the proceedings. Shilpi leaves, taking a lot of Radhika's essential with her. Sujin tries to convince Radhika that the divorce is a waste of money. She almost agrees till she discovers that Sujin has removed a large sum of money from their joint account. Will they be able to resolve their issues? Rajni's heard having a physical fight with someone off-screen.
10 Sep '20
S1 E4 . The Husband
Sujin tries to convince Radhika that gambling is a sure bet. Rajni attacks Radhika with a drunk picture of the latter with another woman, to prove she's a lesbian. Lobo argues it proves nothing. Rajni has an outburst about her private life.
10 Sep '20
S1 E5 . Chimpanzee
Everyone is interested in Rajni's outburst from the previous session while she tries to bring the focus back to the case. In their breakout session, Lobo tells Radhika that it's hard to prove that she's not a lesbian, so best she sells the flat and takes the money. Sujin and Radhika reflect on some bright moments in their marriage. Rajni delivers shocking news.
10 Sep '20
S1 E6 . Reconciliation
Sujin and Radhika realize they should not get divorce. They announce to their lawyers that they would like to withdraw the case. Tripathy strongly opposes it. Rajni implies that Tripathy is in love with her. Tripathy is left bewildered and finds himself in a predicament.
10 Sep '20
S1 E7 . Birthday
It's Radhika's birthday, Sujin sends her a cake with great difficulty and Tripathy stumbles upon them during a very awkward moment. Tripathy tries to cut a side deal with Rajni, to stretch out the proceedings. Rajni takes this to mean that he's hitting on her. Tripathy is in a bind - he needs Rajni's help but will he be able to deal with what she's proposing.
10 Sep '20
S1 E8 . Frozen
Shilpi sets Radhika's room on fire, confesses her love for her and proposes. The lawyers put pressure on Sujin. Rajni provokes Radhika to accept Shilpi's proposal. Will Radhika accept the proposal? Is she really a lesbian? Will Sujin go ahead with the divorce?
10 Sep '20
S1 E9 . Redemption
It is revealed that Sujin gave his wedding ring to Shrestha for a bet which upsets Radhika. Rajni tries to convince Radhika that she's better off without Sujin. A divorce date is finalized. Rajni tells Tripathy that she's ready to co-invest in the flat, since they'll be living together. Tripathy finds himself in a massive dilemma.
10 Sep '20
S1 E10 . Judgment
The flat is sold. Sujin wins a big bet. Tripathy makes a revelation. The lawyers connive. Judge Parekh joins the call. Rajni defends Lobo. Radhika defends Sujin. Both parties file complaints against each other. Judge Parekh comes to a decision. Tripathy, tries to escape from Bombay with help from an unexpected person. Sujin and Radhika have a final moment.
10 Sep '20