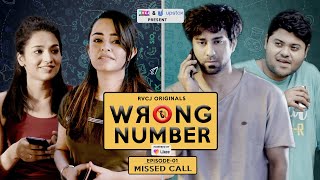 Wrong Number is a story revolving around a hilarious confusion where Karan, a 2nd year engineering student, receives a WhatsApp message from Khushi, a medical student, on his (not so) new number. The catch here is that Karan's new number previously belonged to Rajat, who was Khushi's ex-boyfriend. Rajat broke contact with Khushi after a fight they had around the time when school ended and never contacted her again. But Khushi never gave up her efforts of contacting him. So now, when this number switch happens, Khushi is under the illusion that she is talking to Rajat whereas it's Karan on the other side.
Wrong Number is Hindi Drama web series with Apoorva Arora and Ambrish Verma in the lead role. It is currently streaming at Youtube.

Where to watch season 2 of Wrong Number online?

Other Seasons for Wrong Number

S2 E1 . Redial
Let’s make sure you get out of this lockdown glowing like Khushi & Ruchi with UFO. All you need is your favorite FOREO device, a mask of choice, and a few minutes to spare for a brighter and glowing skin.In the first season of the Wrong Number, we saw how a single ‘Wrong Number’ connected the journey of four different people. Will the same ‘Wrong Number’ bring them together?
26 Jun '20
S2 E2 . S02E02 - Number Saved
Have you checked out the UFO yet? Ruchi's home-spa treatment recommendation from FOREO Sweden will give you healthy and hydrated skin without indulging in expensive spa facials.
02 Jul '20