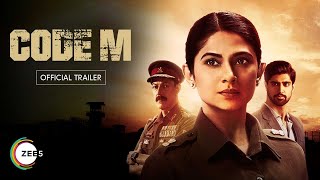 The series revolves around an Indian Army Lawyer Monica Mehra who discovers a conspiracy plot during her investigation of a military encounter case. The series explores mystery about how after investigation the case brings forth several revelations which sends ripples through the entire Indian Army.
Code M is a ZEE5 Original thriller drama series starring Jennifer Winget, Tanuj Virwani, Rajat Kapoor and Seema Biswas. Monica, a fearless army lawyer, is called to investigate an open-and-shut encounter case in which two militants and an army officer are killed. However, she soon realises there is more to the story than meets the eye.
Code M is Hindi Drama web series with Jennifer Winget and Tanuj Virwani in the lead role. It is currently streaming at ZEE5.

Where to watch season 1 of Code M online?

The full cast of Code M includes Jennifer Winget, Tanuj Virwani, Rajat Kapoor and Seema Biswas. Jennifer Winget has also worked in shows Dill Mill Gayye, Bepannah and Saraswatichandra and movies like Phir Se. Tanuj Virwani has also worked in shows Poison and Lips Don't Lie and movies like One Night Stand, Purani Jeans and Luv U Soniyo. The creator of the series is Akshay Choubey, who has also created shows Mum Bhai .

S1 E1 . Iss Case Ko Dil Se Nahi Dimaag Se Solve Karna
Major Monica Mehra is urgently called to Jodhpur to solve a high-profile case involving 3 slain Army officers and 2 militants along the Rajasthan border. Is there more to this open-and-shut case than what meets the eye?
15 Jan '20
S1 E2 . Fauj Ki Dahad
Though the entire case appears straightforward, Monica decides to dig deeper into the lives of the slain militants. While chasing a risky lead, she gets caught up in a thrilling chase in the by-lanes of Jodhpur. Is the whole investigation worth risking her life?
15 Jan '20
S1 E3 . Vardi Maili Ho Ya Saaf, Indian Army Ki Hi Hoti Hai!
Major Gaurav and Shakti are assigned legal counsel. It comes as a slight shock for Monica as their legal counsellor is her Ex, Angad. They agree to work together on the case. Monica meets Asif’s lover, who claims that the Indian Army committed a big mistake. Later, she orders that the bodies of the said militants be exhumed.
15 Jan '20
S1 E4 . Saat Saal Pehle Bhi Ek Encounter?
Monica’s insistence on exhuming the bodies of Asif and Khalid leads to a controversy. But she refuses to give up and manages to get the post-mortem done. The results confirm officers Gaurav and Shakti’s version of the events. As Monica files her report, she learns something about an incident from Shakti’s past.
15 Jan '20
S1 E5 . Har Kahaani Ke Teen Pehlu Hote Hai – Unka, Tumhara, Aur Sach
Though Monica is ready with her final report, she wants to be completely sure of it. She interrogates Gaurav and Shakti separately. Both firmly stick to their version of the story. Is their story too perfect to be true? Meanwhile, Gaurav and Shakti find a cause to worry over this investigation.
15 Jan '20
S1 E6 . Aakhir Encounter Ke Din Hua Kya Tha?
Monica sees a certain pattern in the postings of Gaurav and Shakti since 2009. She believes it couldn’t have been possible without an inside help to both the officers. When she speaks to Shakti’s wife and Gayatri, she suspects foul play in the encounter.
15 Jan '20
S1 E7 . Murder Hai, Motive Hai, Bas Confession Chahiye!
Monica and Angad manage to solve the entire mystery. Now all they need is a confession. They hatch a clever plan to corner the culprits into confessing. After successfully solving the case, Monica leaves for her home. But something makes her come back to the base again.
15 Jan '20
S1 E8 . Jung Mein Kabhi Akele Mat Jaana!
The case is not yet over. The consequences of the staged encounter have reverberated further up the ranks. The Army’s image stands tainted forever as yet another life is lost in the process of finding the truth. Will Monica be able to revive the Army’s image?
15 Jan '20