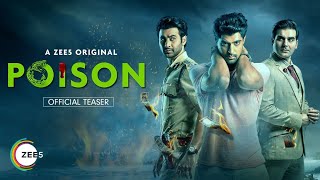 Forgive your enemies...But first destroy them!
Poison is a ZEE5 Original series starring Arbaaz Khan, Tanuj Virwani, Freddy Daruwala and Riya Sen. After his release from jail, Ranveer moves to Goa to seek revenge on his enemies. Meanwhile, DSP Vikram sets his eyes on Antonio Verghese, a don who operates from Goa. Find out what happens when the lives of these three men get entwined.
Poison is Hindi Drama-Thriller web series with Arbaaz Khan and Tanuj Virwani in the lead role. It is currently streaming at ZEE5.

Where to watch season 1 of Poison online?

Other Seasons for Poison

S1 E1 . The Hunter's Scent
After his release from jail, Ranveer eliminates one of his enemies and moves to Goa. The Police Commissioner, who is on the verge of retirement, enlists DSP Vikram to nab Antonio Verghese, a notorious don from Goa. Meanwhile, sub-inspector Nandu investigates the murder committed by Ranveer.
19 Apr '19
S1 E2 . The Web
DSP Vikram readies his men to seize Antonio’s drug consignment. Ranveer purchases Cheetos club in Goa and is warned about the local don, Dominic. Meanwhile, Chris misbehaves with Jhanvi at a club before Ranveer comes to her rescue.
19 Apr '19
S1 E3 . Shades
While Vikram leaves for Mumbai to raid Horizon Infra, Ranveer takes advantage of his absence and tries to impress Vikram’s family members. Rani and her gang kill the broker and break into Ranveer’s house. Meanwhile, Natasha and Vikram land up in the same hotel room.
19 Apr '19
S1 E4 . Stalking
Ranveer reaches home and is shocked to see Vishram’s dead body and is threatened by Rani. Following Antonio’s orders, Domini kills Milind’s son. Vikram and Megha arrive for the reopening of Cheetos, now owned by Ranveer.
19 Apr '19
S1 E5 . The Game Begins
At the Cheetos reopening party, Vikram and Megha celebrate their wedding anniversary. Later, Ranveer is threatened by Dominic and blackmailed by Rani. Ranveer secretly clones Vikram’s phone and strikes a deal with Sridhar to betray his boss, Antonio Verghese.
19 Apr '19
S1 E6 . Tit for Tat
While keeping an eye on Vikram’s family, Ranveer sees Jai Dixit and realises that he must do something about him soon. Vikram meets Natasha who gives him a tip about Antonio Verghese. Later, when Ashu, Jhanvi and Ranveer get high, Ashu feels insecure about Jhanvi and Ranveer’s closeness and takes a drastic step.
19 Apr '19
S1 E7 . Confession
While Vikram and Megha worry about Ashu, Jhanvi seeks Ranveer’s help to handle her. Rani continues to blackmail Ranveer and is later attacked at the hotel. Ranveer meets Dominic and shows him the murder video. Later, when Ranveer meets Vikram and his family, Vikram confronts Ranveer about his relationship with his sister and is shocked to know about Ranveer’s past.
19 Apr '19
S1 E8 . The Rift
Vikram asks Patil to find all the information related to Ranveer’s case and forbids his family from meeting Ranveer. The cops find Jai Dixit’s dead body which leads to a face-off between Vikram and Ranveer. With Sridhar’s help, Vikram manages to gather proof and arrest Antonio Verghese. Meanwhile, Rani joins hands with Dominic and Vikram and Megha have an argument over Ranveer.
19 Apr '19
S1 E9 . Blackmail
Ranveer is held captive in his own house and Jhanvi goes in search of him but they meet at a wrong time. When Antonio’s bail gets rejected, Vikram asks Natasha to leave the town, as her life gets complicated with problems. Meanwhile, Ranveer meets Jhanvi and reveals about his past. Natasha calls Megha home where Megha gets the shock of her life.
19 Apr '19
S1 E10 . Trap
Vikram gets furious and slaps Jhanvi for meeting Ranveer. Chris leaves with his gang to kill Ranveer but Rani interferes and stops them. Upset over his bail getting rejected, Verghese gets Vikram framed in a fake corruption case and Megha comes to bail him out. Using this opportunity, Ranveer kidnaps Vikram’s family.
19 Apr '19
S1 E11 . Face Off
Vikram gets furious to know that Ranveer spied on his family and has kidnapped them. Unable to contact his family, Vikram seeks help from the Commissioner. Finally, Ranveer calls Vikram to an isolated guest house where the family is being held captive. Will Vikram manage to save his family?
19 Apr '19