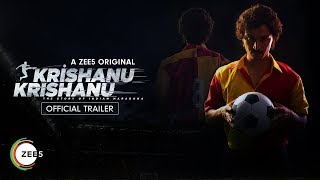 Krishanu Krishanu is a ZEE5 Bangla Original sports drama series which revolves around the life and journey of Krishanu Dey, the legendary Indian football player, who is fondly remembered as the Indian Maradona. When Klara, a journalist, sets out to make a documentary film on Krishanu, she discovers many interesting facts about the football player
Krishanu Krishanu is Bengali Drama-Sport web series with Sreya Bhattacharya and Anirban Chakrabarti in the lead role. It is currently streaming at ZEE5.

Where to watch season 1 of Krishanu Krishanu online?

S1 E1 . Waiting for a star
Klara Muller Bose flies down to Kolkata, to make a docu-drama on Krishanu Dey, popularly known as ‘The Indian Maradona’. She finds out young Krishanu’s liking for cricket over football. Montu, a reckless football prodigy lets down his team only to redeem himself by scoring a last-minute goal.
S1 E2 . This happens only in Kolkata
Krishanu starts playing football for Prabhat Sangha. Klara’s project starts affecting her relationship with Tamal while Krishanu falls in love with Poni. Meanwhile, Montu betrays his team for money and Klara chances upon Montu’s football skills.
S1 E3 . Go back to Germany
Journalist Roop agrees to help Klara find Krishanu. Babji, a political leader, takes Montu and Bulu under his wings. Despite the watchful eyes of their guardians, Krishanu’s relationship with Poni deepens, but future seems uncertain without a sound career of Krishanu.
S1 E4 . Krishanu is found
Klara is yet to find an actor to play Krishanu. Dulal Mitra wants to get involved in this project at any cost and Babji gets Montu involved in a criminal activity. Meanwhile, Journalist Ayan Basu identifies the potential of a future star in Krishanu.
S1 E5 . Star of the future
Through Ayan’s article Mohun Bagan Athletic Club makes an offer Krishanu to play for them. Roop gets to know that his mentor Ayan Basu is Klara’s father. During the match Montu is nastily tackled by the opponent team and succumbs to a career-threatening injury while Krishanu scores his first goal for Mohun Bagan Athletic Club.
S1 E6 . Sharp tackle
Montu is seriously injured and his future is at stake. While Krishanu steadily builds his mark in Mohun Bagan, East Bengal, on the other hand plans on taking him over. Klara is still struggling to find Krishanu.
S1 E7 . Home coming
Krishanu gets selected in the India team. Ayan Basu brings out the scandals of ‘Maidan’. East Bengal and Mohun Bagan’s rivalry shoots up off the ground to get hold of Krishanu.
S1 E8 . The War that is Football
Klara meets Dulal Mitra and finds out the reason behind Ayan Basu’s fatal misery. Montu faces a dilemma as he must choose between Ganesh and Babji. Meanwhile, Krishanu’s East Bengal journey doesn’t seem so smooth.
S1 E9 . The Third Person
Klara finds out about her father’s troubled past and decides not to associate herself with Dulal Mitra. Meanwhile, Krishanu steadily grows as a footballer despite the troubles in his personal life.
S1 E10 . You Are Not Needed
Klara meets Montu and they have a heated argument. However, they later come to an agreement. The shoot begins but with its issues. Meanwhile, Tamal drops Klara from the Krishanu Dey project and Krishanu’s love life prospers.
S1 E11 . The Indian Maradona
The news of Roop’s office outrage breaks out. Klara leaves for Germany and Roop convinces her to continue on her own. Meanwhile, Montu’s personal and professional life crumbles, and Krishanu’s Merdeka performance makes the headlines. But soon everything fades away.