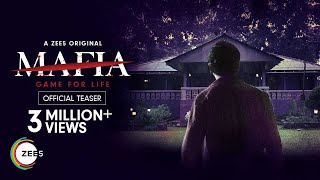 Six friends who were extremely closely knit in their college days reunite for Tanya's bachelor party in Madhupur. However, all six of them are bound by a horrifying incident which had torn them apart for years. The reunion serves to rake up the trauma afresh, turning an idyllic trip into a dangerous cat-and-mouse game. The friends embark on a round of Mafia, the popular game which many of us enjoyed playing in our childhood. Instead of serving as a bonding activity, the game brings out the worst in them, fuelling each of them to act on their hidden agendas filled with deceit and betrayal.
Mafia is Bengali Action-Drama web series with Anindita Bose and Namit Das in the lead role. It is currently streaming at ZEE5.

Where to watch season 1 of Mafia online?

S1 E1 . Reunion
Six college friends—Ritwik, Rishi, Sam, Tanya, Neha, and Ananya—are on their way to Madhupar, a jungle the college friends last visited six years ago. On their way, Anaya recalls their college days and the haunted experience they had at Madhupur during their last visit. Will this visit turn the reunion into an eternal purgatory?
10 Jul '20
S1 E2 . Best Friends
The friends decide to play a game of mafia but end up arguing with each other. Ananya leaves the game, and Rishi blames his wife for forcing him to come to the trip. Soon, Rishi notices a hooded man observing them.
10 Jul '20
S1 E3 . The Stranger
Rishi’s bike is set ablaze, and he blames Tanya for this. Meanwhile, Kunal and Tanya’s partners reach the spot. An agitated Rishi runs into the woods and notices Bidhua’s ghost. Neha suspects Mangal for all the mishappenings after she finds women's clothes in his trunk. Rishi reaches a ledge and sees someone come out of the forest.
10 Jul '20
S1 E4 . Addiction
An upset Tanya has a fallout with Ritwik. Neha reveals that Mangal has been lying about the existence of a woman in the bungalow. Rishi goes missing.
10 Jul '20
S1 E5 . Robinhood
Nitin meets a woman named Priyanka in the woods. He fakes his identity to her and pretends to be local police solving a murder case. Meanwhile, Neha and Nitin find Rishi's bike overturned with punctured tires, and the radio smashed to bits near the lake. Will they find Rishi?
10 Jul '20
S1 E6 . Lust
Ritwik is startled after finding Rishi’s body. the incident prompts him to reflect on his past mistake which ended up in a person's death. He also recalls his past with Bidhua.
10 Jul '20
S1 E7 . Split
Ritwik saves Ananya from Komli, Bidhua’s daughter. In a heated argument, confusion arises, and Nitin is held captive along with Mangal and Komli. Tanya and Ritwik check on a traumatised Ananya while Sam and Kunal start plotting the murder of the captives. After injuring Mangal, Sam starts dragging Komli, grabbing her by the hair. Ananya recalls how Bidhua was dragged in the same way.
10 Jul '20
S1 E8 . Vendetta
In this season finale, skeletons come tumbling out of the closet, and each person's role in Biduhua's murder is revealed. But Ananya has the most shocking revelation yet, and Sam is about to pay for his past deed.
10 Jul '20