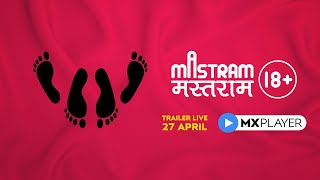 There is one story that we may or may not be aware of which is that of Mastram, the quintessential writer of this era who spoke the lingo of the Hindi heartland - literally. One teacher and many lessons - his stories were the only guide required to graduate from boys to men. His stimulating books served as the wings to every boy's imagination and fantasies. The 10 episodes feature stories of passion intertwined with turbulent day-to-day scenarios from Mastram's real life.
Mastram is Hindi Drama-Romance web series with Anshuman Jha and Tara Alisha Berry in the lead role. It is currently streaming at MX Player.

Where to watch season 1 of Mastram online?

S1 E1 . Episode 1
Rajaram is a struggling writer who is branded as boring and is humiliated by the publishers when they tell him that he will never find any readers. A disheartened Rajaram talks to his best friend and decides to write about fantasies people have and his first hit character is born. With this first character and book, another person takes birth in the form of Mastram, the author who brings sultry characters to entertain the common people.
30 Apr '20
S1 E2 . Episode 2
After Rajaram becomes a hit author as Mastram and starts earning good money, his uncle advises him to think about his personal life and meet a girl for marriage. Meanwhile, Rajaram talks to Gopal and finds another inspiration from a person from his school days, giving birth to another spicy and saucy story for his book. How will his meeting with the girl for marriage go? How will his next book fare?
30 Apr '20
S1 E3 . Episode 3
Rajaram’s personal life is going pretty much normal except for the incident between his uncle and Madhu, while he is facing a writer’s block and is unable to find inspiration for his next book. As fate would have it, Rajaram’s new neighbors, a Malayali couple, enter his life and the unsatisfied wife becomes the center of his fantasies and the inspiration for his new book. Will a mature lady result in another hot-selling book?
30 Apr '20
S1 E4 . Episode 4
Rajaram is putting efforts to settle things in his personal life and with Madhu when he decides to have his first date with her. At the same time, his observations and his capabilities to draw inspiration from his surroundings are growing stronger as he comes across another such scene where the inspiration for his next story comes from. With this, his next book revolving around the Baniya and the Chhoti Bahu starts to develop.
30 Apr '20
S1 E5 . Episode 5
Just as Rajaram’s personal life looks like settling down and his happiness with Madhu seems to be growing with every passing day, another person enters Rajaram’s life. Rajaram meets Madhu’s widowed aunt, who is incidentally quite young. Will this meeting with a new person result in further cementation of the relationship between Rajaram and Madhu? Or will this result in new inspiration for Mastram’s new story?
30 Apr '20
S1 E6 . Episode 6
Rajaram’s mama proposes that they must go to Delhi for the wedding shopping. Gopal accompanies them and after bidding goodbye to Madhu, the trio leaves for Delhi. After checking into a shady hotel, mama leaves to meet with one of his friends. Amid the meet, mama runs into trouble with the police. Rajaram rushes to save his uncle when he finds out that the police inspector is none other than his school friend’s elder sister.
30 Apr '20
S1 E7 . Episode 7
Rajaram decides to go to Chamba for a while to focus. To find a partner for his loneliness, mama also finds a way out. On arriving at Chamba, Rajaram gets to know that actress Indurekha is shooting there. Through the means of little lies, Rajaram makes his way to the actress’s room. In order to impress her, Rajaram makes a new story on the concept of the casting couch. However, by the end of it, Indurekha says something that will change Rajaram’s life and career.
30 Apr '20
S1 E8 . Episode 8
After returning, something strikes Madhu and she begins doubting Rajaram. Her suspicions grow stronger and she resorts to her friends. Her friends then decide to test Rajaram’s loyalty and his character. Two girls invite him over for an offer that is too difficult to say no to. Will Rajaram take the offer, or will he stand victorious on Madhu’s test?
30 Apr '20
S1 E9 . Episode 9
As turbulence hits his personal life, Rajaram decides to pen down a letter to Madhu, calling it quits and breaking off the marriage. Meanwhile, Raju gets married and his wife helps him with his laundry business. But, Raju’s wife wants more from life than just the ordinary, and in the pursuit, she falls for the Sarpanch. The ongoing chemistry is noticed by Rajaram and he decides to put the story in words for his next chapter.
30 Apr '20
S1 E10 . Episode 10
Rajaram along with his family is travelling to Mumbai in a train. Things turn wild when sparks fly between the TC and Rajaram. What follows is intense passion moments between the couple. However, little does Rajaram know that Madhu is also onboard in the same train. Follow the journey of a young man who finds a career in writing, but the sort that could not be revealed to everyone.
30 Apr '20