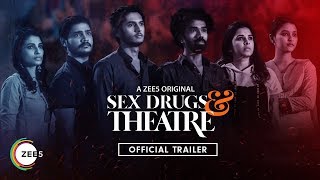 Where to watch season 1 of Sex Drugs & Theatre online?

The full cast of Sex Drugs & Theatre includes Shalva Kinjawadekar, Mitali Mayekar and Nayannah Mukey. There are fresh faces in the cast and no reference to any previous show or films is found. The creator of the show is not known at this time.

Other Seasons for Sex Drugs & Theatre

S1 E1 . The Tragedy
An unfortunate tragedy shocks the entire college. To shift focus away from the incident, the dean pushes Prof. Gaikwad to form a team to participate in the theatre competition. Professor Gaikwad hands over the responsibility to Bhola to regroup the team members.
05 Mar '19
S1 E2 . The Auditions
Just one month away from the competition, the team struggles to find the right script and finally decides to use Rohit’s script. While Sanket, a politician’s arrogant son, tries to throw his weight around, Bhola and others don’t let him have his way. Meanwhile, the auditions begin and Rewa loses her cool due to the lack of maturity among her teammates.
05 Mar '19
S1 E3 . The Director
While Sanket is adamant on directing the play, Bhola comes up with the idea of taking a vote to decide who the director should be. The director is elected and things start falling in place. Meanwhile, Mukta wants a serious relationship and asks Sanket to talk to his parents, but Sanket smartly avoids the discussion.
05 Mar '19
S1 E4 . The Roadblock
When Bhola’s concept is rejected by some ex-students of the college, he decides not to be a part of the play anymore. His absence makes way for Sanket, who takes up the role of the director. Meanwhile, Mukta witnesses the ugly side of Sanket and walks out on him.
05 Mar '19
S1 E5 . The Revelation
When Suraj’s mother gets a huge order, he seeks help from his friends to manage the order. To his surprise, Mukta also joins in to help him, along with Bhola, Rewa and others. Meanwhile, Abhay accidentally gets his hands on an important document which shocks the students.
05 Mar '19
S1 E6 . The Second Play
The practice for the play is in full swing and Sanket joins the team again. However, Bhola and Abhay have another plan in mind. They approach Prof. Gaikwad who supports them wholeheartedly.
05 Mar '19
S1 E7 . The Game Plan
Mukta takes a bold step to shut Sanket up once and for all and makes a fresh start with Suraj. Abhay continues investigating Rohit's death and incorporates the research into their play. How long can they hide the secret from the college management?
05 Mar '19
S1 E8 . The Unexpected Twist
Sanket keeps an eye on Bhola and the dean gets to know about the second play based on Rohit’s story. He questions Prof. Gaikwad and Bhola but they deny any such development. What will the dean’s next move be?
05 Mar '19
S1 E9 . The Grand Rehearsal
The dean has a hint about the second play and expresses his wish to watch the grand rehearsal. Bhola and his team are left with no option but to perform the first play for the dean. Unimpressed with the play, the dean makes a decision that shocks everybody.
05 Mar '19
S1 E10 . It's Showtime
The competition day arrives and Bhola and team receive help from various quarters and manage to get an entry. It’s time to reveal some harsh truths about the system through a play. Bhola and his team are ready to enjoy the experiment without caring much about the competition
05 Mar '19