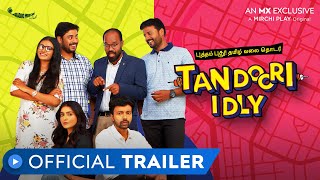 Tandoori Idly is a Tamil language romantic comedy web series that you can enjoy with your whole family. The story of the show is set in the backdrop of an IT company in Chennai. A North Indian girl, Simran joins the company and that changes the life of the team. Selvam, Alex and Chandran initially try to do anything to drive her away, but as time passes the situations change. Workplace politics, office romance, budding friendship and cultural differences are all put to test in the journey of a North Indian girl in Chennai. The Tandoori Idly cast includes Ajai Prasath, Vinod Kumar, Vikkals Vikram, Avantika Misra, Mirchi Saba and Suhasni Sanjeev. Directed by A.L Abanindran and Devanshu Arya the web series is produced by Ignite Films. Tune in to Tandoori Idly to see the classic tale of North vs South, male vs female and many more binaries that in the end come together as one. Join the hilarious roller coaster ride of the comedy of errors that Tandoori Idly brings for you.
Tandoori Idly is Tamil Romance-Comedy web series with Avantika Mishra and Ajay Prasath in the lead role. It is currently streaming at MX Player.

Where to watch season 1 of Tandoori Idly online?

S1 E1 . Delhi-kari
The promotion that Selvam had been much anticipated for slips from his hands and is given to Simran. Alex, Chandran and Selvam are furious that a girl from Delhi gets to be their team leader and gets the promotion that Selvam rightfully deserved. The trio plans to send Simran back to where she came from.
07 May '20
S1 E2 . Accused Selvam
Simran puts a big allegation on Selvam that will jeopardize his career in the company and elsewhere. The only way to get out of the situation is if Selvam apologizes to Simran. An egoistic and strong-headed Sevlam is ready to quit his job, move the country and go with any other option in the book but to apologize. Will Selvam say sorry to Simran and save his job? Will Simran take back the accusation? What will happen to Selvam’s promise of sending Simran back to Delhi in a week?
07 May '20
S1 E3 . North Indian Sappadu
Alex and Chandran’s request, Simran promises to get authentic North Indian for them. However, the food turns out to be not quite what they expected. Later, Selvam commits an honest mistake which has consequences none thought of. Simran had to face the brunt of Selvam’s carelessness. Even though it happened accidentally, Selvam can now finally get rid of Simran. However, is this what he really wants? As apologies are in order yet again, will Selvam put his guards?
07 May '20
S1 E4 . Ottuketta Ragasiyam
Tandoori Idly Selvam assures the boys that he doesn't have romantic feelings for Simran. However, Suja is persistent that even if he does not have feelings for Simran at the moment, he will surely in the future. A phone call from home bothers Simran and she seemed troubled all day. Alex and Chandran make an attempt to eavesdrop on her conversation, but the Raj’s terrible Hindi makes matters even worse. After digging Simran’s social media accounts, the gang is forced to question what is
07 May '20
S1 E5 . Yarukku Perandhanal?
Alex and Chandrana plan a surprise party for Simran’s birthday. The whole matter is a hush-hush event and so they try to avoid confronting Selvam. Selvam finds their behaviour suspicious and takes Raj in custody to make him reveal the truth. The group plans a surprise party for Simran at the beach house. However, given the history of the group, will the surprise work?
07 May '20
S1 E6 . Inidhai Pirivom
Selvam and Simran’s friendship grows stronger. With this friendship strengthening, Alex and Chandra worry about their friendship with Selvam. Later, the trio tries to convince Siran that Saree is a graceful attire, but Simran remains adamant that it is uncomfortable and she prefers her usual dressing.
07 May '20